‘The rights of children would be strengthened and affirmed’ 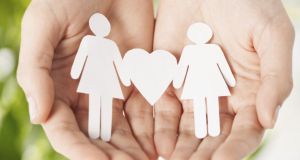 ‘The status, rights and responsibilities of civil partners can be changed at any time through legislation’ Photograph: Getty Images

The marriage equality referendum debate has become increasingly intense in recent weeks, so it’s important to focus on the core issues at stake. Three key reasons to vote Yes.

1 Gay couples would be able to get married. The referendum, if passed, would allow gay couples to get married. It would insert the following 17 words into the Constitution: “Marriage may be contracted in accordance with law by two persons without distinction as to their sex.” This new sentence would not define or redefine marriage. The constitutional protections for the “Family” and for the institution of marriage, on which the “Family” is founded, would both remain in place. But for the first time our gay sisters and brothers would have the same right to form a constitutional family that we heterosexuals take for granted.

2 We would have a more equal Ireland. If the referendum is passed, Ireland would join a growing European and international consensus that there is no valid legal basis on which to discriminate against same-sex couples. It would be an immensely positive vote for a more tolerant, inclusive and compassionate society.

3 The rights of children would be strengthened and affirmed. If passed, the referendum would affirm that the small number of children currently being brought up by same-sex couples could become part of a constitutionally protected family, valued by Irish society on an equal basis with other families. It would also reassure children who are themselves gay or lesbian that they are equal in law with their heterosexual siblings and friends. Then this nation really would cherish all its children equally – as promised in the 1916 Proclamation.

These are the key issues in the referendum – and the three most important reasons to vote Yes.

Three reasons not to vote No Here are three further reasons for a Yes vote – to reject the bogus claims being made by the No side.

2 This referendum will not affect adoption/ assisted human reproduction/surrogacy or child welfare laws. The No side argues that if same-sex couples are allowed to marry, they would automatically get a constitutional right to procreate using AHR or surrogacy – and that the Oireachtas would then be unable to legislate to differentiate between married gay or straight couples in respect of access to AHR or surrogacy.

There is absolutely no basis to this argument.

First, it ignores two key realities: a. the vast majority of couples availing of AHR or surrogacy at present are heterosexual; and b. there is no requirement that a person be married before they may avail of such services.

Second, there is no absolute right to procreation, even for heterosexual married couples. In the one case in which the Supreme Court has addressed this issue, Murray v Ireland, the court held that the State could negate the right of a married couple to engage in natural procreation, since they were both in prison. The courts have never recognised any right to procreate using donor eggs or sperm for heterosexual couples, married or not.

Third, any legislation concerning children will always be subject to the overriding “best interests of the child” principle enshrined in article 42A of the Constitution, which must be the primary focus of any legal regulation of parenting, including regulation of adoption, AHR or surrogacy.

The Children and Family Relationships Act 2015, for example, provides already that gay couples may adopt, subject to this principle. Geoffrey Shannon, chair of the Adoption Authority, has confirmed that the adoption process will remain the same, regardless of the referendum’s outcome.

Similarly, the 2015 Act already provides for strict regulation of donor-assisted reproduction, and prohibits anonymous sperm donation. This will be unaffected by the referendum. Finally, whether the referendum is passed or not, the Oireachtas may prohibit or restrict access to surrogacy through legislation.

3 This referendum will not affect teaching in religious-run schools Some argue that religious schools may be sanctioned if they do not change their teaching to recognise same-sex marriage. This is ridiculous. The referendum is only about civil marriage; religions and religious-run schools will remain free to teach in accordance with their ethos. When civil divorce was introduced in 1995, this did not affect Catholic teaching on marriage.

This referendum is simply about equality; the equal right of same-sex couples to marry.

So let’s support our gay friends and relatives on 22nd May with a resounding Yes.

1 Who are Ireland’s 17 billionaires?
2 Ipsos MRBI poll: Fianna Fáil edges ahead of FG as SF surges
3 Rob Delaney: ‘As my career took off, my son got sick...then he died’
4 Gardaí suspect botched murder attempt was bid to avenge Mulready-Woods death
5 Fintan O'Toole: Safety-first politics has had its day
Real news has value SUBSCRIBE