Ireland’s flood problem is small but a rethink is required 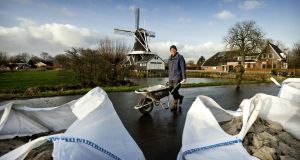 Flood defences in Holland. Making space for floodwaters is the concept now being pursued by the Dutch becuase it affords greater protection by seeking to replicate natural processes.

Arising from the wettest December ever recorded in most parts, many of our rivers have spread across their flood plains, exposing people and properties to hazardous flooding.

While the damage and displacement is a source of extreme psychological and financial distress amongst affected families, when viewed unemotionally the scale of damage on an aggregate basis is not large by European standards and manageable from a national perspective.

Nevertheless, the increasing challenges associated with climate change mean that we now require a national discussion about how we, as a society, want to design our built environment and manage flooding within it, whilst recognising the constraints imposed by flood plains.

Unfortunately this debate is some way off occurring, with the electoral cycle fashioning the messages that people want to hear.

This was not the case during the coastal storms and flooding in 2014 when there were clearer messages that everywhere cannot be protected, that resources must be prioritised, and that consideration must be given to coastal retreat and non-structural measures.

Albeit in an inland flooding context, the strength of these messages has shifted subtly over recent months. In the run up to this flooding episode flood-risk management plans were described as being about combining structural (defence) and non-structural measures. However, the plans are now being framed more simplistically as ones that will generate “solutions”, with heavy reference to the structural measures and with mixed messages about the idea of relocation as a policy measure.

This approach raises unrealisable expectations as to what is likely to be feasible or deliverable within a reasonable time horizon.

An approach solely reliant on flood defences no longer represents the optimal approach to managing flood risk, with combinations of measures across a catchment now evidenced as good international practice.

What should also be apparent is that communication about risk is important. Policy-makers, politicians, and lay people may use the same words when speaking about the management of flood risk but in some instances they are talking about different approaches that have not been fully articulated.

So when politicians make assertions about emergent plans containing solutions to address flood risk along the Shannon, it is not unreasonable for the public to infer that a large body of flood defence works may begin in the short run.

However, it would be wise to reconsider carefully what has actually been said, taking account of non-structural measures that reduce damages.

Moreover, a risk-based approach helps inform the combination of measures that will deliver the greatest benefits to the most people at most risk, whilst prioritising available resources.

In places where defence options are not viable, the focus is on complementary measures to reduce the impact of flooding. This includes flood warnings, awareness-raising to encourage adoption of household-level protections (eg flood gates, wet proofing), greater co-ordination amongst critical service providers and community action. While there is talk of a modest expansion of flood insurance coverage, this will not help to reduce the likelihood of incurring damage.

Public demand for defences increases with flooding episodes. The allocation of any additional resources in Ireland must continue to be prioritised on the basis of risk; there are about 70,000 homes assessed as being at flood risk nationwide.

Any impression of reprioritisation of resources for political reasons could undermine the credibility of the sponsoring body (OPW), whose reputation is important given its lead role in the design of flood-protection schemes and anticipated role in flood forecasting; people must have the confidence to trust and follow the guidance and warnings provided.

In terms of communities putting their faith in flood defence measures, it is important to understand that the protection offered is not absolute.

In fact it increases vulnerability to more extreme events if defences are overwhelmed as recently occurred in Britain, with some communities unexpectedly finding themselves flooded behind defences. Therefore the complexity of these risks must be communicated in a targeted way so that even protected communities are forewarned.

Whether we want to live in places with high river walls, canalised rivers and sea walls or whether we want to redesign our towns and cities so that spaces like parks, roads and car parks are seen as temporary space for flood waters rather than increasing our vulnerability to extreme events by trying to keep all flood waters out.

A programme of relocation should form part of this discussion.

Making space for flood waters is the concept now being pursued by the Dutch in the Room for the River programme whereby flooding is facilitated through rededicated flood plain. This approach affords greater protection by seeking to replicate natural processes.

We need to reduce the footprint of our cumulative development to adapt to future climate extremes. This is achievable but it will require political leaders to help shift how society thinks about flooding and its management, and commit to long-term planning for climate adaptation. A starting point would be more accurate descriptions of the timescales and measures to manage flood risk.

Dr Eoin O’Neill is a lecturer in environmental policy at UCD Planning and Environmental Policy and UCD Earth Institute. He has worked in the UK Environment Agency