‘You do not have to look hard online to find abuse, on both sides of the argument’ 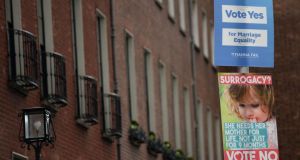 ‘If a bitter word on the doorstep may well damage a candidate’s character, calling people “homophobes” or “degenerates” does not change many minds.’ Photograph: Dara Mac Donaill / The Irish Times 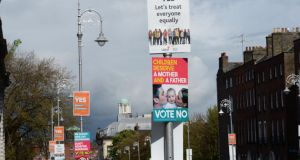 So who is “irrational and highly insulting,” mouthing “crap” or “medieval” arguments. The No side in the marriage debate.

And who puts out a “tide of hate” in an effort to allow “sexual perverts” to “pretend to be married by referendum.” Well, that would be Yes supporters.

You do not have to look hard online to find abuse on both sides of the argument. One member of the Mother of God Forum (“a place dedicated to the Mother of God”) writes, “I would be a quivering basket case if I spent much time in the land of comments”. Quite.

Research shows that civil or positive behaviour towards others improves inter-group attitudes and is therefore socially constructive or beneficial. Online, the absence of such personal interactivity removes a natural check on abusive language.

Yet civility is a useful tactic when it comes to canvassing support from the undecided. If a bitter word on the doorstep may well damage a candidate’s character, calling people “homophobes” or “degenerates” does not change many minds.

Research suggests that in referendums where the stakes seem not very high to most voters, campaigners need to coax people on points that are salient to them. Absent that, voters take their cue from less rational prompts.

The home of negative campaigning is the United States, with its breathtaking TV ads aimed at destroying political opponents. The jettisoning of the fairness requirement for US broadcasting, and the subsequent spread of Fox News, has further coarsened debate there. It has fostered a political climate in which political compromise is now regarded as exceptional and even a betrayal.

One of the most cutting interventions in Irish political life occurred when Pádraig Flynn accused presidential candidate Mary Robinson of not only having new clothes and a “new look” but “a new interest in the family”.

He added, “None of us who knew Mary Robinson very well in previous incarnations ever heard her claiming to be a great wife and mother”. She still became president, and many believe Flynn’s snide remarks helped rather than hindered her.

In Britain, where both main parties now employ US advisers, there are signs of incivility in this year’s general election campaign.

The Tories have tried to portray Ed Miliband as someone who cannot be trusted, on the grounds that he “stabbed his own brother in the back to become Labour leader.”

But there is also an incivility that is unspoken. It manifests as superiority, a lack of humility that rubs voters up the wrong way.

While passion in politics is a good thing, people do not like politicians or campaigners who seem to speak down to them. When voters do not hear a reasoned or intense argument for changing the Constitution, they may stick to the status quo for comfort.

Referendums on a number of issues including the Nice Treaty (first time around) and Oireachtas reform have failed not simply because people wanted to give politicians a kicking. They failed because parties did not campaign hard enough.

And taking the moral high ground has not helped the Catholic bishops in recent decades as they lost a succession of battles in the Irish culture war, and their influence on the Constitution waned.

Some liberal activists have learned from the bishops’ mistakes. Others campaign in a way that suggests only stupid or hateful people could vote against marriage equality. Their attacks on the requirement for balanced debate do not appeal to the Irish sense of fair play.

The real winners when civility prevails are ordinary voters and the society to which they belong. The benefits of reasoned but passionate argument were evident earlier this month when the DCU school of law and government mounted a public debate.

Hundreds heard gay Labour TD John Lyons and Senator Katherine Zappone go head-to-head with gay No voter Keith Mills and Senator Ronan Mullen. It was intelligent, engaging and courteous, and showed clearly that there are at least two sides to every discussion. And the other side may win. That’s democracy.

Dr Colum Kenny is professor of communications at DCU