‘I don’t care what they call it, I’m in favour of marriage equality’ – Fr Gerard Moloney

‘While I see it as a sacrament, I believe it’s up to the citizens of the State to decide how they define marriage and who can enter into it’ 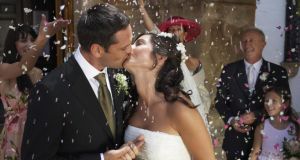 As a priest, I subscribe to the Christian understanding of marriage that it is a sacrament celebrated between one man and one woman. Photograph: Getty Images

Two years ago, the Convention on the Constitution spent some time discussing same-sex marriage.

It led to a wider debate about the nature and definition of marriage and whether “marriage” was the best word to describe such a partnership between two persons of the same sex.

Having listened to one such discussion, I fired off a quick tweet. I told my 500-plus followers: “I don’t care what they call it, I’m in favour of marriage equality.”

The downside of Twitter is that you can make statements in the heat of the moment that land you in hot water or that you later regret. And, after I sent it, I began to wonder and worry. Given that I’m a Catholic priest, I expected an instant response.

And I was right. The response was such that I decided to leave Twitter.

Eighteen months later I returned to that medium.

I missed being able to comment on current and sporting affairs (especially about Liverpool Football Club), but mostly I wanted to recover my voice.

Although I haven’t tweeted about it, my views on same-sex marriage haven’t changed.

As a priest, I subscribe to the Christian understanding of marriage that it is a sacrament celebrated between one man and one woman – a public love commitment before God that each celebrant makes one to the other for life.

But it’s clear that not everybody shares this belief. Not all recognise marriage as a sacrament or give it any religious significance. They see it solely as a legal union between two people that is recognised and solemnised by the State.

The increasing number of non-church weddings points to this fact.

While I see it as a sacrament, I believe it’s up to the citizens of the State to decide how they define marriage and who can enter into it.

And that’s how it should be, because we live in a diverse, complex society today.

Shrill as the debate has become, a referendum allows all citizens – whether they live in Dublin 4 or Donegal northeast, whether they dominate social media or are computer illiterate, whether they believe in God or have no religious belief, whether they see this as being about human rights or about upholding traditional values – to have the ultimate say.

Infinitely better to have the people decide than leave it to the Oireachtas, or not face up to the issue at all.

I have a disability and a Bible passage I find most consoling states that God created every individual in God’s own image and likeness.

Even though I don’t have full use of my left side, I know that I reflect God’s image every bit as much as does a champion athlete or the body-perfect celeb who posts pouting selfies on Instagram.

My faith tells me that it doesn’t matter if one is able-bodied or bed-ridden, black or white, in Princeton or in prison, gay, straight or in between, God has shaped everyone in God’s own likeness and desires that everyone has the opportunity to live life in all its fullness.

The God I believe in doesn’t create intrinsically disordered persons or discriminate against people simply because of who they are – or whom they love. God, who transcends gender, sexual orientation and all human categories, brings everyone into existence and cherishes everyone equally.

That’s why the church must be sensitive when discussing same-sex marriage. Its treatment of the LGBT community down the years has been appalling.

The church doesn’t have to change its teaching on marriage or pull back from debate about this or other issues.

It does need to take extra care, though, when stating its case, not just because of the damage its statements and actions have done to the gay community in particular in the past, but also because its abuse of power in the Ireland of yesterday demands it shows humility today.

Fr Gerard Moloney is editor of Reality, the Redemptorists’ magazine