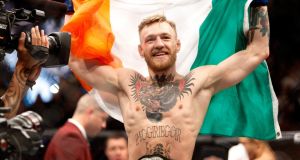 The Notorious Conor McGregor came capering out of the shadows of James Joyce’s novel Finnegans Wake hours before he was scheduled to fight his much anticipated UFC title match at the MGM Grand Las Vegas on December 12th.

The synchronicity of the scene stunned me - like a perfectly timed left hook. McGregor wore a matchless grin, and somewhere, James Joyce was laughing.

I was nursing just a tad of a hangover from a long night out, but still decided to continue reading “the Wake” that morning (a giant, mind-boggling 1939 boat of a novel that nobody reads, a tome about humankind’s joys and heartbreaks across past, present, and future).

I was not yet 200 pages in this second time around, and I’d grown convinced that Joyce had invented his own surreal, crazed dream language in part so that future readers might glimpse events of their own time through free-association; Joyce, I was convinced, wanted to amaze future readers with scenes that would seem to them like prophecy.

Now, as I sat staring into its magical wake, a gush and swirl of language took shape and came alive before me, like the mischievous Irish faeries and druids of a Yeats poem. For me, the next four pages were an eight-step program toward utter amazement:

1. The Rise of the UFC and the Octagon

Joyce set the stage - something about “a plain straightforward standup or knockdown row”, an “octagonal argument among slangwhangers” and “unbalanced attention upon the next octagonist”.

My eyebrow shot up. Was this the unique ring, the “Octagon”, of the UFC? I kept reading.

2. The Title Fight with Aldo

“One hailcannon night …treated with what closely resembled parsonal violence … hits … with thanks for the pleasant evening … fast and furious … beat … Blood ….”

I knew that the wildly popular southpaw Conor McGregor was to step into the “Octagon” to fight the celebrated Brazilian Jose Aldo later that night. And this fight certainly seemed personal.

I was thunderstruck. Conor McGregor is a “Lefty” known for the power of his left hook, and this section was reading like “Lefty” takes the cake this night - wins out over a clumsy-footed foe inside an octagon!

Then came more about “flesh and blood games” … “games for fun” … games concerning a, “Thonderman”, a game called, “Hat in the Ring” and “Last Man Standing” and “Fickleyes and Futilears” and “Hops of Fun”.

“Now it is notoriously known how on that surprisingly bludgeony Unity Sunday when the grand germogall allstar bout was harrily the rage between our weltingtoms ….”

What was going on here?!

McGregor is famously known as “Notorious” Conor McGregor. And by the time his “all star” bout with Jose Aldo was finished, it would probably be early Sunday morning in the US - and the featherweight belts of the UFC would be unified … “Unity Sunday” indeed! I couldn’t believe what I was reading.

But there was more of the impossible to come, for I read that: “Irish eyes of welcome were smiling daggers down their backs”.

I put the book down. I knew that Irishman Conor McGregor has a prominent tattoo that runs down the length of his back, seeming to represent curving thorns that also happen to resemble … “smiling daggers”!

Eagerly, I continued reading about this furious match, as now Jose Aldo seemed to dart in and out of the darkness of the text:

“the scut in a bad fit of pyjamas fled like a leveret for his bar lives … without having struck one blow … as there was not a moment to be lost, after he had boxed around … bamp him and bump him blues, he collapsed … his face enveloped into a dead warrior’s telemac … moaning feebly … and then a nation louder … hemiparalysed by the tong warfare and all the shemozzle … his cheeks and trousers changing colour … whole continents rang”.

I was simply astounded. For me, the curious “Lefty” of Finnegans Wake WAS Conor McGregor, a “bunnyboy rodger”, a red-bearded “fox” hopping around in Jose Aldo’s head, a “scruff, scruffer, scrufferumurraimost”, full of “duckings and thuggery”, pummeling his foe as millions of Irish cheered in wonder for this “prince of the Fingallian in a Hiberniad of Hoolies”!

And then suddenly, the text referenced Nero and Nebuchadnezzar, and I immediately thought how the screaming hordes of Las Vegas in late 2015 are not so different from those of Nero’s Rome.

Joyce had made past present. He’d made the near future into something representing a mythic past. And I knew too that the interpretation of the dream of Nebuchadnezzar by the prophet Daniel warns us about “feet of clay”, that even a fighter as great as Jose Aldo - even the Notorious One himself, McGregor - is bound to one day topple and fall.

“But would anyone, short of a madhouse, believe it?” the swirling text of shadowy dream-language then shouted at me.

When Notorious Conor McGregor knocked out Jose Aldo 13 seconds into their UFC title match in the Octagon early this past Sunday morning with a brutal left hand, I was a believer - in both the Thonderman, Notorious Conor McGregor, a modern-day version of the mythic Irish warrior Finn MacCool, “nursing such a spoiled opinion of his monstrous marvellosity” - and in the genius of a laughing James Joyce.

1 Coronavirus: From midnight tonight Dublin will move to Level Three until October 10th -Taoiseach
2 Life in Level 3: What will happen under new restrictions in Dublin?
3 Coronavirus: NPHET letter to Government warns of ‘extremely critical juncture’ for Dublin
4 Michael McDowell tells Seanad he has ‘no confidence’ in NPHET
5 Stephen Donnelly dodges the questions as Matt Cooper mercilessly pursues the answers
Real news has value SUBSCRIBE