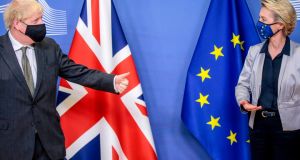 While the current imbroglio between the UK and the EU (perhaps more accurately between England and the EU), whatever its outcome, is of great significance for all the countries involved, and especially for Ireland, it is perhaps worthwhile remembering how the development of our role within the EU since we joined has also fundamentally altered our relationship with the neighbouring island.

British archives throw a fascinating light, in particular, on the negotiations between us and Britain during the second World War, when we were not in a powerful alliance – as we are now – and when we were dependent on Britain for key supplies (coal and tea among them) in ways that would be astonishing to any Irish negotiator today.

These archives also reveal the way in which the British negotiators in matters of trade between the two islands at the time ruthlessly exploited their advantages. There is a report in the British files of a complaint made by Erskine Childers – a future Irish Fianna Fáil Cabinet minister then working for the Federation of Irish Manufacturers – to the United Kingdom Representative to Éire, Sir John Maffey (later Lord Rugby), in February 1941. The problem, Childers complained, was that because Irish imports from Britain had declined, Ireland was “selling agricultural goods in return for a commodity [sterling] whose value is evidently doubtful irrespective of who might win the war.”

Anti-British feeling in Ireland was evidently on the rise, not least because of the supply situation.

Maffey reported to London in March 1941 that he was “happy to report that so far the ill feeling and resentment that come when people are deprived of assets and prospects have been directed against the de Valera government”, although “in more knowledgable circles the verdict is not so generous.”

John Leydon, then Lemass’s departmental secretary in the Department of Supplies, told Maffey that he felt that he had been badly let down by his opposite numbers in the [British] Board of Trade. According to Maffey, Leydon “spoke with considerable violence about our policies and added that he ‘hoped never to go to London again’.”

Maffey warned London in March 1941 that leaning too hard on Dublin might have unwelcome consequences.

“These events,” he told his UK colleague, “must give a tremendous impetus to the policy of self-sufficiency here. We must realise that if Ireland contrives to set up an independent economy, the arguments for the strategic unity of our island group are greatly weakened.”

A month later he returned to his theme, telling London: “The economic picture created by our restriction of supplies threatens considerable embarrassment to this country and there is a widespread fear that disastrous unemployment and food shortages are threatening . . .we should be wise to be liberal with a spasmodic generosity in the matter of tea [which] would furnish a complete answer to the charge that we are actuated by resentment.”

Subsequently, perhaps concerned that his advice had not yet been acted on, he returned to his theme, telling London that “a tea bonus would do a great deal to spoil the picture which de Valera is anxious to present to the world.”

Almost a quarter of a century later British attitudes, although expressed in more sophisticated language, still carried the same message. Arthur Bottomley, then a British Labour minister, told his cabinet colleagues in December 1965 that then taoiseach Seán Lemass’s attitude to international trade was promising, because there was the prospect of Ireland lowering its tariffs against the UK, and “Irish industry would be forced to be efficient and improve their exports to all destinations.”

There was, he noted with evident satisfaction, “a readiness to put less emphasis on the question of partition and [by] the growing middle class and the business leaders to accept the economic interdependence of the Republic and Britain . . . [This] could place our political relationship with the Republic on a better footing than ever in the past . . . Although the Irish are being very demanding, a breakdown would lead to a revolution of opinion . . . Subject to our approval in each instance, the Irish may reduce their tariffs in favour of Northern Ireland on particular items.”

More than half a century on, it is clear that Bottomley’s view of Anglo-Irish relations, while partially accurate for the time in which it was delivered, can today be seen as far from prophetic.

As the cronies of Stephen Dedalus’s father put it in A Portrait of the Artist as a Young Man, tempora mutantur, nos et mutamur in illis.