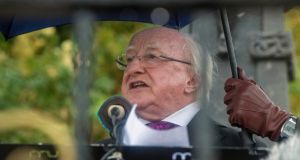 Some of those organising history discussions and conferences for the autumn are keen to keep the conversation about the 1916 centenary going, but with a twist. Next month’s Dublin Festival of History, for example, will host a discussion framed around the idea that this year’s 1916 commemorations were conducted with “dignity and gravitas” and succeeded in “igniting a public mood of pride and confidence”, but as the commemorative reach extends, the festival asks: “How can we sustain the positive tone in future commemorations?”

It should not be about a “positive tone”, however, but an appropriate tone. Of course commemorating the War of Independence and Civil War will create complications different to that of remembering 1916, but, as with the commemorations this year, there are also opportunities to broaden the parameters of our understanding, highlight new information, and expose propaganda masquerading as history, and deliberate selectiveness serving contemporary political needs at the expense of evidence and nuance.

At Béal na mBláth last weekend, for the annual Michael Collins commemoration, President Michael D Higgins spoke with an edge about the Civil War and its atrocities “that we must recognise for what they were, on both sides: cruel, vicious, uncontrolled, and at times informed by vengeance”. He also referred to civilian losses “inflicted in a way that had little to do with republicanism or any emancipatory version of nationalism”.

While he stressed the need for a “forgiving consciousness”, he queried the neglect of the class dimension in historical analysis and referred pointedly to “the distance between the background of Collins and those who would later go on to fill the major offices of the new state”.

The President’s assertion about these applications from combatants cannot be proved conclusively until the full pension archive of almost 300,000 files is available in the coming years, but it is also undoubtedly informed by the experience of his own father. John Higgins was a member of the IRA in Cork; interned during the Civil War, he lost his job as a result. He had to endure a 22-year wait and numerous appeals before a small military pension was approved in 1956 (£32 a year) and the family was fractured as a result of financial difficulties.

Many similar experiences will be laid bare as more archival material is released and for some, commemorating the Civil War will remain an intensely personal business and about discovering painful detail. According to the President’s brother, their father “never spoke very much about it all actually. They just didn’t”.

There were many reasons for this – not just the experience of war and violence but also the difficulties of adjusting to civilian life, especially in a hostile environment; and some chose, or were forced, to leave Ireland. A combination of these factors made family relationships and post-conflict adjustment tortuous for many. Veterans also questioned what their sacrifices amounted to. As the patriarch Michael Moran in John McGahern’s Amongst Women remarked bitterly: “Sometimes I get sick when I see what I fought for.”

According to the writer Seán O’Faoláin, the Civil War “woke us up from the mesmerism of the romantic dream. It set us asking questions about the presanctified dogmas of our history”. Those questions will be updated, broadened and added to over the next few years, and as Higgins underlines, re-examining the era involves key issues of class and violence and hierarchies of suffering and benefit.

Doubtless, alongside this, attempts will be made to latch the politicians and soldiers of a century ago on to a contemporary agenda by a selective reading of history. Minister for Social Protection Leo Varadkar, in delivering the annual Collins/Griffith oration at Glasnevin, also last weekend, referred to the question of the Border in the wake of the Brexit vote and applauded the “inclusive vision of Arthur Griffith” because at one stage Griffith referred to unionists as “my countrymen”.

As Higgins highlighted, “no single side had the monopoly of either atrocity or virtue”, and this was true of words as well as actions. Childers was executed during the Civil War; his son, also Erskine, became the fourth president of Ireland in 1973. As president, Childers was subjected to systematic censorship; he had plenty to say about commemoration but was not allowed say it publicly. At least now, both citizens and their representatives can air their thoughts about legacy and commemoration more freely.