Here and there – An Irishwoman’s Diary on waiting time 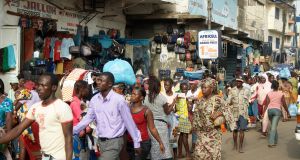 “After the 6pm curfew was announced, the ramshackle stalls, with their wares illuminated by yellow light from kerosene lamps, disappeared from the Freetown side-streets.” Photograph: Getty Images

It’s strange. Doors with locks, metal shutters, iron grills that scream “Keep Out” – an unfamiliar sight in our town. The feel of it is familiar though, another time, another country, some 30 years ago.

After the 6pm curfew was announced, the ramshackle stalls, with their wares illuminated by yellow light from kerosene lamps, disappeared from the Freetown side-streets. I missed the taste of sweetcorn charred black on the outside, crunchy inside and the fiery beans wrapped in warm bread. I missed the laughter of children around the stalls, playing with cars sculpted from wire clothes hangers.

Today, squad cars, lights flashing, have set up a roadblock in the main street. They stop drivers, who tired of the lockdown, want to travel beyond the allocated distance, to go somewhere, to get away.

In Sierra Leone, khaki-clad soldiers marched through the streets, stopping people who were spilling into the city, maybe thinking they could get away, outrun the war.

At night I watch House of Cards on Netflix, light candles, enjoy their soft light and sensuous smells as the summer light slowly fades. Sometimes I read a book from the local library, downloaded via Borrowbox to my tablet.

Because of its proximity to the Equator, there was no dusk in Sierra Leone. Darkness dropped over the village at around 6.30pm. Sometimes, I crossed the dusty pink road to the tailor’s tiny shop, to buy a single Leader cigarette and to listen to the whirring of his sewing machine. Above the shop a piece of white board displayed a blue scissors, a useful symbol in a place where most people could not read or write. I lit candles when there was no kerosene and read books until my eyes grew tired. The books, mostly by African writers, with dazzling orange covers and dizzying prose, I borrowed from the British Council Library in nearby Freetown.

This week I join the queue outside the post office. Tired of emails and texts, I’m eager to write letters and cards. Back in 1991, I queued for stamps. I queued to collect my post. I queued to buy kerosene. I queued to board rust-eaten buses that clattered along pot-holed roads. Waiting at junctions for hours for connecting buses, I queued for hot prawns on sticks and luminous pink Kool Aid. Sometimes I just queued!

Now I work from home, connect with people on Zoom, Teams, What’s App and Skype. I participate in webinars with people from around the world, people I am unlikely to ever meet face to face. Back then I taught with blackboard and chalk in a classroom with my students. Sometimes, on Sunday, they invited me to their homes to meet their family and eat groundnut stew oozing palm oil.

I take a walk in the evenings. People, some masked, hurry by, careful to observe the social distancing rule.

My walk home from the university where I taught from 1989 to 1991 was also about five kilometres. That was my favourite time of day. The sun had softened. The dusty red path to the village glowed with a pale pink light and the place was almost beautiful. Women, returning from the village pump, buckets on their heads, babies tied securely to their backs, greeted me with “Aw di bodi?”

I’d linger before going indoors, study red chilies drying in the sun, listen to the thud of the pestle, as cassava leaf was beaten to a pulp in a wooden mortar, sides etched with deep cracks from the thumping of a thousand cassava leaf suppers. Later, I’d hear the women call children – Khadiata, Fatmata, Abdul Karim, Ishmael – beautiful melodic names, that still linger in my head.

People want someone to blame – the Chinese, the World Health Organisation, the pharmaceutical industry that doesn’t have a vaccine for the virus. The Sierra Leonean people blamed the government for the unpaid salaries and empty promises; they blamed the diamond dealers who hovered like vultures for stones sifted from river beds by barefoot women and children; sometimes they blamed their colonisers, who left them, in 1961, with only the bitter taste of disappointment.

But there’s all the goodness too. Yesterday, a book of poems by Paula Meehan left on my doorstep, last week a surprise delivery of two bottles of wine and a bottle of olive oil, the phone calls, the seeds my brother posted to me for my garden.

In Sierra Leone, there were the Irish potatoes, so called to distinguish them from sweet potatoes, that one of my students brought me as a gift, shortly after I arrived in Sierra Leone. Knowing I was Irish, perhaps she thought the taste of potato would ease the loneliness of being in a new country. There was the piece of woven country cloth, like Irish linen but coarser, that someone, I forget who, brought me from their home village.

I still have it, in a box in the attic, with other things from that time. What will I have to remember this time?

1 Minister for Agriculture Barry Cowen sacked by Taoiseach
2 Gardaí found naked man on a cross being whipped in Dublin club, court told
3 David McWilliams: ‘Ireland is three decisions away from being a perfect country’
4 Coronavirus: Pub reopenings in danger as NPHET expresses serious concerns at case growth
5 A US food writer moved to Ireland. Here’s what he found
Real news has value SUBSCRIBE