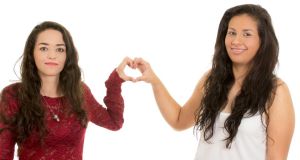 ‘What we are seeing from those in civil partnerships is their desire to enjoy what other people have in marriage. This referendum is just another step towards our society embracing difference and really being inclusive.’ Photograph: Getty Images

It is strange to think of two people of the same sex being married because we are not used to it. For most of history from the Middle Ages onwards, we have seen male-female marriage, so this is different and sometimes society is very slow to take on difference, but it is important that society embraces difference and diversity. Therefore, I support this referendum because that is what it is about.

I am coming to the referendum from the point of view that it is a human right and no one should be discriminated against on the basis of their sexuality, gender, religious beliefs or none, or their ethnicity. As far as I am concerned, the referendum is about a human right for homosexual and gay people to marry and to enjoy the benefits of marriage.

I was a member of the Constitutional Convention and I was there when this issue was being debated. Over the course of the convention it was one of the more moving debates. It was also at times disturbing to listen to people deprived of the right to marry and to listen to the children of same-sex couples who are deprived of rights because their parents were not married. My overall impression from all the debate at the Constitutional Convention was that, far from undermining or threatening marriage, the introduction of same sex marriage would in fact affirm marriage because that is what same-sex couples want.

The 66 citizen members of the convention who came from a wide section of society, urban and rural, and of a great variety in ages, gave a strong endorsement that was supported by the political representatives there. It was interesting to see the vote on it. Some 79% voted to change the Constitution to provide for civil marriage for same-sex couples, 78% favoured directive or mandatory wording in the event of such an amendment going ahead, meaning that the State should be obliged to enact laws providing for same-sex marriage; and 81% voted for the State to enact laws incorporating necessary changed arrangements in regard to the parentage, guardianship and upbringing of children in lesbian and gay headed families. That was a very strong endorsement. That is reflected in the various opinion polls that have been taken, that there is support for equality in marriage.

I think back to when homosexuality was illegal in this country, and I acknowledge the work of Senator David Norris in bringing about change. I am also conscious that while we are discussing a step much further on, that of marriage equality, there are countries in the world, particularly in the developing world, where gay, lesbian and transgender people are suffering massive discrimination. They are being put into jail and tortured there and being punished horrifically because of their sexuality.

We have had civil partnership legislation for a couple of years now and the sky has not fallen and marriage has not been undermined. What we are seeing from those in civil partnerships is their desire to enjoy what other people have in marriage. This referendum is just another step towards our society embracing difference and really being inclusive. It is continuing the journey that lesbian, gay, bisexual, transgender and intersex people have been on. It is a journey that has been very painful for them at times and very difficult because they suffered abuse and discrimination, bullying and harassment. There were times when some of them had to deny their sexuality. Times have changed. Civil partnership was a step forward and now marriage equality is just furthering that progress.

The Referendum Commission is very important in ensuring that everybody is aware of what this means. Up to now generally it has been the parents, siblings, children of same-sex ­couples and support groups who really know what this means to people who want equality of marriage. It is time that this spread to society in general. It is also about the kind of society that we want, one where respect and dignity are valued and one that is inclusive when it comes to human rights, and that means the human right of same-sex couples to marry.

At another time in our history it would have been considered preposterous for women to be able to vote, own property, drive cars and so on. Women achieved the rights they had been denied for so long; now is a chance for homosexual, lesbian and transgender people to realise a right which they have been denied but available to everyone else in society.

Maureen O’Sullivan is an Independent TD for Dublin Central

Readers are invited to comment on the issue at http://www.irishtimes.com/opinion/have-your-say-should-irish-voters-pass-the-same-sex-marriage-referendum-1.2203859

1 Graham Norton: ‘I wanted out, out, out of Ireland’
2 Prepare for six months of Covid-19 restraints, warn health officials
3 Speed and distance of Covid-19 droplets tracked by Mater researchers
4 Covid-19: Seventy cases in Cork traced to local pubs and restaurants in recent weeks
5 Susie Dent: ‘Jimmy Carr is incredibly rude to me. I took it as a compliment’
Real news has value SUBSCRIBE