The view presented of Irish history is simplistic and inaccurate 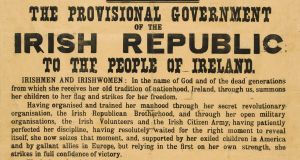 The 1916 Proclamation: Sacred text or a historical document?

In dealing with historical anniversaries, government priority is to make them politically useful or ‘relevant’, or at least to minimise any pitfalls they may present. Thus in 1998, when the Good Friday Agreement coincided with the bicentenary of the 1798 rebellion, it was important for nationalists to highlight the brotherhood off the United Irishmen while playing down the sectarian nature of the upheaval.

Early in 2015, in the early stages of discussion about the forthcoming centenary, the government rather fatuously tried to sound notes of ‘inclusivity’ and ‘reconciliation’ about an event which was essentially aggressive and confrontational. Two important background factors had to be kept in mind: on the one hand, the remarkable rapprochement in British-Irish relations and on the other, the seemingly inexorable growth of Sinn Fein (which ironically had played no part in the 1916 Rising).

Now that we have started the run-in to the centenary (and to a renewal of a Fine Gael led administration?), there is no more talk of a British royal presence at forthcoming events, and the government seem determined that Sinn Fein will not be allowed make all the nationalist running. Unfortunately this includes indulging our morbid propensity for necrophiliac pomp and circumstance as with the ‘funeral’ ceremonies for O’Donovan Rossa and Thomas Kent (the government should exercise caution in this matter: with all respect to ‘the dead generations’, they should be kept in their place).

More positively however, the role of Oglaigh na hEireann in these ceremonies and in distributing flags and proclamation copies to schools, is quite properly being used to point up the legitimacy of this Republic, something about which Sinn Fein is noticeably ambivalent. In all of this, it should be recognised that local communities are enthusiastically in favour of centenary celebrations in their areas and that they are not unduly concerned about the warts of their native sons. Finally, it would appear that the government, supported by historians, has shrugged off John Bruton’s fallacious historical speculation: there is no evidence that Home Rule would have led peacefully to national independence. The imperial government was determined to preserve the integrity of the United Kingdom at all costs, and was physically forced to alter its mindset only by the militant nationalist resurgence from 1916 onwards.

The government is supplying all schools with copies of the 1916 Proclamation as a civic and educational measure. It is not clear how if pupils are expected to revere it as a sacred text or analyse it critically as a historical document. Once again, the politician’s priority may differ from the historian’s. For the general public, disenchanted though they may be, it seems to fair to say that the Proclamation is above cynicism: after all the signatories put their lives where their rhetoric was. Historians however look at the document with more critical eyes. For them, it is primarily an IRB separatist manifesto with an obsession about national sovereignty now seen as outdated. Guarantees of rights, liberties and opportunities take up only a line or so, and there is no mention of a social programme, still less of a cultural goal. The view presented of Irish history is simplistic and inaccurate, and the Proclamation reflects the unsustainable assumption, still widely held today, that the island of Ireland comprises only one nation. The historian would also point that the most quoted phrase from the document, ‘cherishing all the children of the nation equally’ really refers to nationalist-unionist divide and is not, despite general misunderstanding, a clarion call to social justice or civil rights.

During the centenary commemorations, the government will doubtless emphasise the most radical note sounded in the Proclamation, that of gender equality. That will be a winner all round, and rightly so. But if this or any other administration wants to be remembered as a great reforming force in this decade of centenaries, then it has three years to realise the shining vision of the children’s charter set in the Democratic Programme of the First Dail in 1919, and shamefully sidelined by mainstream nationalists ever since.

“It shall be the first duty of the Government of the Republic to make provision for the physical, mental and spiritual well-being of the children, to ensure that no child shall suffer hunger or cold from lack of food, clothing or shelter but that all shall be provided with the means and facilities for their proper education’ .

Prof John A Murphy, Emeritus Professor of History at University College Cork, was speaking at the Dublin Festival of History as part of a panel debate on ‘Commemorating 1916’ which was held at Dublin Castle on Friday September 25th. The festival runs from Sept 25-October 10th. For further information, please visit www.dublinfestivalofhistory.ie

1 ‘Unseasonably’ windy weather set to buffet Ireland
2 Covid-19: Travel restrictions to stay and 'green list' put on hold amid fears of second wave
3 If you are young and live outside Dublin you could be in trouble
4 Ruth Negga: ‘People who say they don’t consider skin colour... are you f**king blind?’
5 Taoiseach ‘disappointed’ he only learned of Barry Cowen’s driving ban on Friday
Real news has value SUBSCRIBE