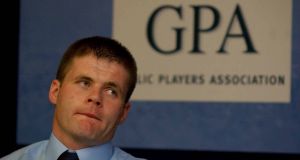 Dessie Farrell, chief executive of the Gaelic Players Association: “To achieve the level of excellence required at intercounty level, our players need to be supported by a range of services on and off the field.” Photograph: Damien Eagers / Sportsfile

The new agreement between the GAA and the players’ body, the GPA, has one key overriding principle: that county players should be fully supported in their personal development, while striving for excellence as unpaid athletes.

It is a major step forward following the original agreement between the GAA and the players’ body in 2009 where we enshrined the amateur ethos of the GAA into our constitution but at the same time promised the proper welfare and development of county players.

We fundamentally believe players have a unique and critical insight into the many challenges facing the GAA at all levels. This is why giving intercounty players a formal input into reaching collective decisions on these matters is a hugely positive step.

To achieve the level of excellence required at intercounty level, our players need to be supported by a range of services on and off the field.

The programmes provided by the GPA include support for education at all levels, career development, professional skills development, leadership skills, personal coaching, business start-up skills, counselling and a benevolent fund.

This flies in the face of international research into athletes’ performance. Research shows that supporting players with their personal growth, and helping them understand and cope with the all-pervasive and potentially damaging athletic identity, can have a profoundly positive influence on their lives.

It enables players to cope with the demands of the game and the transition out of sport more effectively.

It’s the norm around the world to give this type of support to athletes performing in highly competitive environments. It fits in well with one of the most unique elements of Gaelic games where players performing at the top level are not paid.

Central to this agreement is an acknowledgment that the intercounty player is harnessed commercially by the GAA and sold for the wider benefit of the association through media rights, sponsorship, franchising and licensing.

There is a virtuous circle at work here. Clubs nurture young talent through voluntary effort, top club players go on to play at county level, roughly 80 per cent of the GAA’s annual income is generated by the inter-county game and roughly the same percentage of that funding is redistributed throughout the association.

It is only right that the GAA recognises the commitment made by county players by investing in the type of player development and welfare services that are established best practice across world sport. It is sad to see opponents using the “us and them” argument with county players or scapegoating county managers as the “problem”. I would seriously question how representative some of the loudest critics of the agreement are of club members.

A vibrant intercounty tier has always been critical in developing a modern sport. There is no evidence to support the argument that providing resources for county player supports will in any way impact on the GAA’s commitment to supporting the game’s development and grassroots structures. Quite the opposite.

It is ironic that allowing county players a greater say in GAA affairs is considered a negative.

Club players are the best represented body within the GAA – they have their own administration, they have a delegate at county board level and can take motions all the way to congress. It is completely unproductive to think we can turn back the clock, that the inter-county tier can be shrunk, and that commitment levels can simply drop.

What we need are concrete structures supporting both club and county games. We also need charters between boards, managers and players. The GPA is one stakeholder trying to find a solution on behalf of its members and will continue to work towards positive change.

The new agreement was negotiated by county players on behalf of county players. It was done on the implicit understanding of what it takes to be the best you can be. It was supported by a progressive GAA delegation who acknowledged the essential role the county player has in developing the future of our sport.

This is a win-win for everyone involved in Gaelic games.

Dessie Farrell is chief executive of the Gaelic Players Association

1 Minister resigns over Dominic Cummings’ Covid-19 lockdown trip
2 What Courtney Love did straight after she left 1980s Dublin
3 The great unlocking: Top holiday destinations welcome back tourists
4 We are ‘sale agreed’, but can we go back with a lower offer?
5 Richard Corrigan offers €90,000 wedding prize for frontline healthcare worker
Real news has value SUBSCRIBE