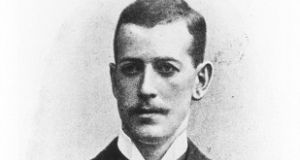 John Pius Boland: Dubliner won not one but two gold medals at the first modern Olympics in Athens in 1896

How well known is the first Irish-born winner of an Olympic gold medal? In fact, he won not one but two gold medals at the first modern Olympics in Athens in 1896. He won them in tennis and, remarkably, he hadn’t intended competing in the games in the first place.

The person in question is John Pius Boland, who was born 150 years ago at 135 Capel Street, Dublin.

He was one of seven children of Patrick Boland (of the famous Boland’s Mills baking family) and Mary Donnelly.

His mother died when he was seven and his father when he was 12. Their maternal uncle Nicholas Donnelly, auxiliary bishop of Dublin, became the children’s guardian.

He attended the Catholic University School in Dublin and then Cardinal Newman’s Oratory School, Birmingham, where he became head boy. A BA from London University and a BA and MA in law from Oxford University followed. He was called to the Bar in 1897 but never practised.

He spent six months as a student at the University of Bonn in 1895/6 and while there kept a journal where he recorded his Olympic experience.

The journal was published in 2008 in the form of a book entitled From Bonn to Athens: Single and Return, edited by Heiner Gillmeister.

While at Oxford, he learned of the proposed revival of the Olympic games and “straightaway determined to be present if possible at these games,” as a spectator, of course.

Konstantinos Manos, one of the secretaries of the organising committee of the Athens games, was also studying at Oxford at the time and Boland contacted him and organised a meeting for him to spread the message of the proposed revived games.

Boland travelled to Athens for the games with a fellow student, American-born Alfred Pazolt, who subsequently became an artist.

There was clearly no intention on his part to participate in the Olympics; although he’d received tennis coaching at school, he played it purely for recreation and indeed described it as “decidedly inferior” to cricket.

But when an English-speaking Greek he met at dinner, Dionysios Kasdaglis, told him that few had entered the tennis events and that he himself had done so, Boland agreed to enter the singles and doubles.

He got a racket easily enough but couldn’t find tennis shoes and played in ordinary leather shoes.

The 13 tennis entrants were an eclectic mix, including a Serbian weightlifter, a Greco-Roman wrestler, a German 800-metres runner (Friedrich Traun, who became Boland’s doubles partner), an English hammer-thrower and the Australian 800- and 1,500-metre Olympic champion. Kasdaglis represented Egypt as he was born in Alexandria and the rest of the competitors were Athenian.

Boland defeated three Greek opponents to reach the singles final, where he beat Kasdaglis. As it was the latter who’d encouraged him to enter, Boland considered withdrawing but believed he “could not scratch as the game was of an international character”. He and Traun won the men’s doubles title.

There is a story that Boland insisted an Irish flag (a gold harp on a green background) be flown at the closing ceremony when the winners were presented with their prizes but this doesn’t seem to have happened.

However, when he returned to Oxford and found the tennis victories ascribed to “England” in the Oxford Magazine, his Irishness came to the fore. “I refuse to foreswear my ‘Hibernian origin’ and the green flag in the field of sport,” he recorded in his journal.

His Olympic experience seems to have aroused in him a greater awareness of his Irish identity, it has been suggested.

He was Home Rule MP for South Kerry from 1900 to 1918, leaving as a result of the conscription crisis that latter year.

He became an Irish-language enthusiast, learned the language, joined the London Gaelic League, set up an Irish summer college in Kerry and was instrumental in having Irish made a compulsory matriculation subject at the National University of Ireland (NUI) in 1908. He remained a strong Irish-language advocate until his death in London on St Patrick’s Day 1958.

He was also a strong supporter of the development of Irish manufacturing, urging people to buy Irish-made goods and he has been credited with having the “Made in Ireland” or “Déanta in Éirinn” trademark officially registered.

He married Eileen Moloney in 1902 and they had six children. He lived in England and was general secretary of the Catholic Truth Society from 1926 to 1947. He received a papal knighthood in recognition of his work in education and in 1950 was awarded an honorary doctorate of laws by the NUI.

1 Cork shootings: Gardaí find lengthy ‘suicide note’ on one of the dead men
2 Former solicitors ran an ‘identity factory’ in committing fraud – court told
3 Ciara Kelly: I was pregnant, unmarried, a junior doctor and I got old-school comments
4 Róisín Ingle: Five small ways to find joy in a pandemic. Only one of them is illegal
5 Kanturk farm shootings: A timeline
Real news has value SUBSCRIBE