Frank McNally: Books that took a bullet in 1916

An Irishman’s Diary: On Marsh’s Library 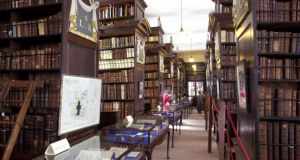 Marsh’s Library, Dublin. It has changed so little in 314 years its founder Archbishop Narcissus Marsh would have no trouble recognising it.

Mention of “the cricket bat that died for Ireland” (Irishman’s Diary, July 4th) reminds me of the shelf of books that was seriously wounded for Ireland, also during the 1916 Rising.

Like the bat in Elverys window, they too were minding their own business at the time. And they should have been at even less risk than the bat, located as they were in the secluded surrounds of Marsh’s Library, whose location in St Patrick’s Close in Dublin, next to the cathedral, is the very definition of what estate agents call “tucked away”.

During the week of the Rising, however, by unlucky chance, the old library found itself on one of the front lines of the conflict: caught between the rebel garrison in Jacob’s biscuit factory and a British army machine gun post in St Patrick’s Park.

Thus, on April 30th, 1916 – a Sunday – a careless army gunner strafed the reading room of Marsh’s, damaging the roof and windows and, as the library’s sober assessment put it later, “injuring five books”.

“Injuring” was an understatement. As Jason McElligott, current keeper at Marsh’s, has written of the incident (in History Ireland), each book was hit in the spine, with “an entry hole of 1.5cm” widening, via the 400-odd pages of each volume, towards an exit wound “five to six times larger”.

The books, part of the original collection donated by Marsh’s first librarian, the Huguenot refugee Dr Elias Bouhéreau, were deliberately left unrepaired. And all jokes aside, they remain a chilling lesson in the realities of war. In McElligott’s words, the trajectory of bullets through dense pagination provides a hint of the effect “on frail human flesh and bone”.

After that day’s excitement, and a smaller disturbance during the Civil War, Marsh’s returned to its usual quietude. If anything, these days it may be a little too well hidden. Considering the treasure it represents, literary and architectural, it remains criminally under-appreciated by Dubliners.

Not only is it Ireland’s oldest library, founded in 1701, it must be one of the country’s very few 18th-century buildings still serving its original purpose.

It was designed by William Robinson, the same architect who had been responsible for the Royal Hospital Kilmainham, which is now, of course, housing modern art rather than old soldiers.

Readers in Marsh’s are no longer locked in metal cages lest they steal books. But the cages are still there, as are the original oak bookcases. And the library has changed so little in 314 years that its founder, the magnificently named Archbishop Narcissus Marsh, would have no trouble recognising it.

His fame lives on in the establishment’s name, if in little else. In fact, one of the library’s early clients, Jonathan Swift, thought even that was more immortality than Marsh deserved.

The two had a serious row when the library was being set up, first over the archbishop’s wish to combine the job of keeper with the office of cathedral treasurer and, second, his plan to give the combined post to Dr Bouhéreau. Since the Frenchman was getting the appointment in return for donating his 10,000 books, it looked (in Swift’s opinion) like simony or the sale of a church office.

But even after the plan to unite the jobs was dropped, the great satirist remained unimpressed by the library founder. In 1710, when the latter was in his 70s, Swift suggested Marsh had been unique, given his educational and other advantages, in having “escaped” any kind of greatness. He added: “No man will be either glad or sorry at his death except his successor”.

But then Swift was never one to hold back. As dean of St Patrick’s, he invented a new type of grave memorial: one designed to shame the relatives who hadn’t paid for it, despite repeated requests.

The cheaper substitute was for the Duke of Schomberg, who had been killed at the Battle of the Boyne 40 years before and whose bravery (as Swift’s inscription still informs visitors) “had greater renown among strangers than had the ties of blood”.

Next to the bullets that ripped through Dr Bouhéreau’s books, the only other signs of violence in Marsh’s reading room may be those scrawled on volumes formerly owned by Swift. Take a history of another rebellion, the Scots one of 1715, on which he unleashed the following fusillade in the margins: “Cursed, abominable, hellish Scottish villains, everlasting traitors.”

So maybe the archbishop got off lightly.

1 How long can Government afford to keep State pension age at 66?
2 One hundred Irish retailers for all your online Christmas shopping
3 What I learned about male desire in a sex-doll factory
4 Covid-19: Pressure over breakdown in tracing system intensifies as State enters Level 5
5 Miriam Lord: All test and no trace makes Jack, and heaven knows who else, a very ill boy
Real news has value SUBSCRIBE