Fiscal Advisory Council: Return to austerity can be avoided 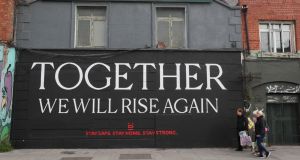 An additional €8 billion of spending has been budgeted so far to deal with Covid-19 impacts in the State. Photograph: Brian Lawless/PA Wire

The framework document between Fianna Fáil and Fine Gael picks up the Herculean task of making a five-year plan for Ireland at a time of crisis. The Covid-19 pandemic is imposing a heavy human, social and economic cost.

While the situation evolves day by day, a framework to recover the economy today, rebuild it tomorrow and revive Ireland for the future is a step forward.

The Government’s new stability programme update shows how dramatically the outlook has already changed. With a very sharp recession, the budget deficit is expected to peak at 13.3 per cent of national income this year and government debt will soar to 125 per cent of GNI*.

There will be lasting effects on workers, business and the public finances.

For today, the priority is to support the economy while strict confinement measures are in place. Government schemes are rightly cushioning the blow to people’s incomes and will help many firms survive.

The fiscal costs will be huge. The Department of Finance currently budgets an additional €8 billion of spending to deal with Covid-19 impacts. These costs could yet increase. Government revenues are expected to fall to less than €73 billion this year, €15 billion lower than in 2019.

The deficit will narrow significantly as the situation improves and should not be an immediate concern. The State’s creditworthiness remains good in an environment of ultra-low interest rates.

For tomorrow – once containment measures have faded – there will be ongoing need to support demand to help activity recover over time to a normal level. Households and businesses will remain cautious.

Compared with the 2008 crisis, it should be possible to avoid severe austerity. This crisis is different: the economy went into it in robust health rather than overheating and overborrowed. With the right choices at Irish and euro-area level, the recovery should be less drawn out.

There will likely need to be fiscal adjustment to make up for any permanent shortfall of tax revenues and put the debt-to-GNI* ratio on a downward path, but there should also be some space to support demand.

Public investment was slashed during the previous crisis. The costs of prolonged underinvestment in key areas such as housing have since become clear. While investment spending may need to be redirected and the ambition of earlier plans adjusted, public investment should be a key part of a new national economic plan.

For the future, Ireland will have to make the choices about what it wants to achieve, against the background of a much higher debt-to-GNI* ratio and a less favourable economic situation. It is welcome that the framework document recognises the need for all fiscal decisions to be sustainable and within the European Union rules.

Despite the difficult background, universal healthcare, better housing and addressing climate change are all still achievable.

However, these goals require substantial resources to succeed. To take one example, the 2017 Oireachtas Sláintecare report estimated that its preferred model would ultimately add €2.8 billion to the annual budget for the health system.

This will require hard political choices about how to fund these policies. The ability to finance them through economic growth will likely be more limited even with policies to raise Ireland’s productivity. Spending will have to be reprioritised between programmes or become more efficient, or the tax burden will need to increase. Someone will need to pay.

These choices will be much harder than in recent years. The days of high growth and buoyant revenues generating sizeable fiscal space every year were never likely to last.

At the same time, Ireland will need to address some long-standing challenges. First, rising pension costs as the population ages more rapidly will take up much of the fiscal space each year.

Second, tackling climate change may require substantial budgetary outlays. Third, the State is over-reliant on corporation tax receipts, which accounted for one in six euro of revenue in 2019.

Given this more uncertain and challenging context, costly spending pre-commitments or taking major tax items off the table would be shortsighted. For example, income tax is one of the most progressive taxes and accounts for more than 30 per cent of revenues.

Carbon taxes could help, but are unlikely to make a major contribution. On the spending side, social welfare – which includes pensions – makes up about a third of spending. Narrowing the range of policy tools risks making future choices more complicated.

Hercules succeeded in achieving the 12 tasks, just as Ireland achieved a spectacular recovery from the 2008 crisis. There is no reason why Ireland cannot repeat this and emerge stronger and more cohesive from these difficult times. However, this will require hard political choices today, tomorrow and further ahead.