Fintan O’Toole: The slide into ‘post-truth’ is not inevitable 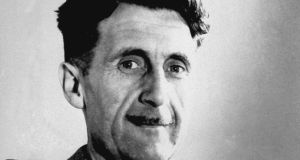 George Orwell, in 1944, wrote that “almost nobody seems to feel that an opponent deserves a fair hearing or that the objective truth matters so long as you can score a neat debating point”. Photograph: AP

I read a depressingly accurate article the other day about the effects of social media on the uncivil way we now engage in political debate: “The thing that strikes me more and more – and it strikes a lot of other people too – is the extraordinary viciousness and dishonesty of political controversy in our time. I don’t mean merely that controversies are acrimonious. They ought to be when they are on serious subjects. I mean that almost nobody seems to feel that an opponent deserves a fair hearing or that the objective truth matters so long as you can score a neat debating point.”

How well put that is, and how well calculated to get any decent person to get off Twitter and Facebook now. And how prescient of George Orwell to write this in the British left-wing weekly Tribune on December 8th, 1944. That’s 1944 as in the profound seriousness of the fight against fascism and the great solidarity and unity of purpose that it engendered in most of the English-speaking world.

At that moment which we fondly imagine in retrospect as a pinnacle of communal fellow-feeling, Orwell despaired: “Nobody is searching for the truth, everybody is putting forward a ‘case’ with complete disregard for fairness or accuracy, and the most plainly obvious facts can be ignored by those who don’t want to see them… To admit that an opponent might be both honest and intelligent is felt to be intolerable. It is more immediately satisfying to shout that he is a fool or a scoundrel or both, than to find out what he is really like. It is this habit of mind that has made political prediction in or time so remarkably unsuccessful.”

In resurrecting this lament from almost 75 years ago, I am not trying to dismiss anxieties about our present culture of public argument. Social media have made what Orwell called “the atmosphere of hatred in which controversy is conducted” both more extensive and more intensive. More extensive because pretty much everybody can join in – Orwell’s depression came from reading political pamphlets but we are all instant pamphleteers now. The “anyone” can and does include hostile foreign governments. And more intensive because the anonymity afforded by social media and the way they encourage us to form tribal gangs both conspire to push back the boundaries of decent expression.

Why is it surprising to find one of the great political writers of the 20th century so doleful about the state of political controversy in 1944?

It is not for nothing that the word “mob” was originally just short for “mobile” – the angry crowd on the street can now be summoned virtually by the device in our pockets. All the things that Orwell was writing about – the lack of interest in objective truth, fairness or accuracy, the assumption that those who disagree with you are by definition bad people, the wilful ignorance of awkward facts, the urge to make up for weak argument by shouting more loudly – are now literally at our fingertips. It is cold comfort to know that we have been here before.

But, in recalling Orwell’s complaint, I actually want to suggest the tentative possibility of optimism. The slightly hopeful question is this: why is it surprising to find one of the great political writers of the 20th century so doleful about the state of political controversy in 1944? Why are we experiencing these things as if they were new when in fact they are not?

Maybe – just maybe – because at some stage between 1944 and now, things were actually somewhat better. Could it be that that most despised of entities, now dismissed in a contemptuous acronym MMS (mainstream media) did the world some service by creating some space for the weighing of evidence, for honest attempts at truth, for giving a fair hearing to opposing views?

'Truth,' as Oscar Wilde put it, is 'rarely pure and never simple'

I am not naive about any of this. Most newspapers (though not this one) have rich owners with their own agendas. Most journalists (including this one) have conscious and unconscious biases and blind spots. Public broadcasters such as RTÉ and BBC have similar limitations and perhaps even deeper assumptions about the range of acceptable discourse. “Truth,” as Oscar Wilde put it, is “rarely pure and never simple”. Even the most honest striving towards it is innately inadequate. I concede all of that. But I still think it reasonable to suggest that in the decades after Orwell was writing, mainstream media did create a decent semblance of a public realm in which different opinions could be debated in good faith.

They did this for exactly the reasons that had animated so much of Orwell’s own work – the fear of totalitarianism and an awareness that democracy could not survive without discourse that is both civic and civil. Over time, the urgency of those reasons seemed to fade. The 1930s and 1940s became a distant and irrelevant past.

They are not so distant now. But the slide into “post-truth” is not inevitable. In order to have the “post” you have to have had the “truth”, or at least some rough and imperfect arena in which it was actively pursued. That arena didn’t happen by accident. It was created and sustained by democracies for their own survival. History tells us that the awful questions never go away – but also that the decent answers don’t disappear either.