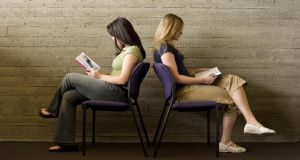 ‘Unlike most of the other unknown knowns, the doublethink on abortion is fully institutionalised. It’s written into law. On the one hand, a woman has a constitutional right to travel abroad to get an abortion. On the other, if she performs the very same act in Ireland she and her doctor and anyone who has helped her are all liable to 14 years in prison.’ Photograph: Getty Images

We don’t know ourselves.

We talk, of course, relentlessly. There’s scarcely a donkey in the country with hind legs – they’ve all been talked off. And we’re nosy. If curiosity really killed cats, they’d be as rare in Ireland as snakes. But the chatter and gossip skate frantically over the thin ice that barely separates us from untold depths of silence. The eloquence of Irish life is often an immensely skilful slalom of evasive manoeuvres. The obstacles we evade are not really secrets. They’re what I’ve called elsewhere unknown knowns – things we know damn well but somehow manage not to know at all.

One of the remarkable things in Irish life is an ability to be genuinely shocked by what we already know. Other societies are rocked by revelations that alter their sense of reality. We’re shocked simply by the expression of realities that are already familiar. We were stunned to discover that our three-bedroomed suburban houses were not worth a million euro each, even though we knew they couldn’t be. We were flabbergasted to find that our banking system was deeply awry even though a series of scandals had told us exactly how bad it was. We were traumatised when we discovered that the industrial schools and Magdalen laundries that loomed over our streets and villages were institutions of slavery and degradation, even though we knew that they were there to terrify and control. We were stunned by revelations of systemic corruption in our political system even though we had colluded in it for decades. Huge aspects of our modern history – the Great War for example – come at us after a century as sudden surprises.

This isn’t play-acting or hypocrisy. It’s much weirder than that. In all of these cases, and in many others, the shock is genuine. And that suggests that the things we don’t want to know have been successfully consigned to a realm of silence. In our gabby, garrulous culture, the things we don’t want to talk about are made somehow non-existent. We unknow them. We proceed as if they had never occurred to us. Until, at last, some kind of tremor shakes the walls of silence and what we’ve always known is “revealed” to us.

This ability to unknow runs deep. Maybe it goes back to the Great Hunger and the need to lock all of that horror and shame away so that a society could carry on. Maybe a culture of mass emigration has a lot to do with it – the experience of raising children as if you didn’t know that they would leave you soon and for good. Maybe a religious culture that twisted the body and its desires into sites of sin and shame drove these habits even deeper into the mind. But whatever the sources of this strange cognitive dissonance, the point is that it has to stop. It’s bad for us. If you can’t see and discuss what you actually know, you can’t make rational choices – personal or public.

In itself this is oppressive. It turns perhaps 200,000 Irish women who have had abortions into human embodiments of the unknown known, distorting and denying their actual lived realities. But the doublethink is also bad for all of us. It gives official sanction to the almost psychotic disjunction between what we actually know about Ireland and what we allow ourselves to acknowledge and articulate. It sustains the silences that corrode our capacity to grasp our own realities.

It is one thing to be private; quite another to be shamed into silence. Women and the men who love them have been forced either to tell their stories or to collude in a lie.

Those stories are hard for some people to hear, just as the breaking of so many other silences has been hard. But this is the only cure for what ails us. Until we choose to know our own reality we can’t change it for the better.