Fintan O’Toole: Must we see dead babies to imagine a catastrophe? 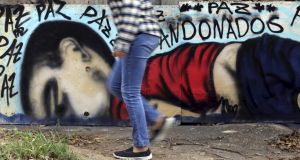 ‘Must Christ be crucified in every generation for the benefit of those who have no imagination?” The question posed by Bernard Shaw in his play St Joan might be adapted: do we have to see pictures of drowned babies before we can imagine what a massive human catastrophe looks like?

The most basic form of imagination is sympathy. It is the impulse to ask: what would I do if I was them? What would I feel if I was experiencing what they’re going through? The very slow collective European response to the refugee crisis suggests that Europe has lost touch with that imaginative capacity. The belated arrival of that basic sympathy suggests that some good might come from this terrible wave of suffering. Europe just might recover the thing that it needs to survive – the ability to imagine catastrophe.

I recently watched a haunting film I hadn’t seen before. The Italian director Roberto Rossellini is famous for his rough, shockingly realistic film about Italian resistance to the Nazis, Rome, Open City, shot shortly after the liberation of Rome. But he made a much more powerful film in Berlin in 1947, with the apocalyptic title Germany, Year Zero.

It is astonishingly bleak: vast panoramas of rubble and ruins, refugees crowded into the remaining housing, packs of feral children living underground, hunger gnawing at everyone all the time. The physical collapse is also a moral implosion: women and children are preyed upon, shady characters abound. The central character, a 12-year-old boy, ends up killing his own sick father and then throwing himself to his death from a gutted building. You have to keep telling yourself – this is not some imaginary Hell. It is one of Europe’s greatest and richest cities less than a single lifetime ago.

And within living memory, much of Europe was like that. Which is to say, also, that it was like Aleppo or Kobani, like much of Syria and Iraq today. In 1943, the International Labour Office reckoned that “more than 30 million of the inhabitants of Europe have been transplanted or torn from their homes since the beginning of the war.”

The memory of these catastrophes created the new idea of “Europe”. The eventual European Union was built on the understanding that catastrophe was a living possibility, a clear and present danger. In a sense, the EU itself was a refugee – a hopeful flight from chaos and barbarism.

The people who built it, for all their limitations, had seen and smelt and touched the experience of collapse, of comfortable worlds swept away. They did not have to imagine what it is like for human beings to be stripped of everything that is contained in that most human of all words – home. Memory alone provided them with the essential knowledge that societies have to be vigilant in minding their better selves because the worse selves are never far away.

But as memory failed, a greater act of imagination was called for. After the end of the Cold War, it seemed that Europe’s dark 20th century had finally ended too, that the memory of catastrophe was no longer necessary. The collective European imagination proved too feeble to keep that memory alive, even when it was fed by the resurgence of its nightmares in the wars of the breakup of Yugoslavia.

Since the great crash of 2008, Europe has been seemingly forgetful of its own fragility and thus short on solidarity and compassion, long on dogmatism, punishment and short-term national self-interest. Its orthodoxy has been the complacent self-righteousness of a technocracy that knows it is always right.

Given that mindset, refugees could only be “them” and not “us”. Europe could not put itself in their road-worn shoes. The political framing of what was happening did not invite European citizens to remember that the refugees’ catastrophe was, very recently, also ours. That failure of imagination dehumanised the refugees – they were dirty, out-of-focus images on our peripheral vision. They were not people but threats, not the human known with which we could identify but the foreign unknown that we must repel.

Yet, though it has taken far too long and required too much needless suffering, the European imagination of catastrophe has begun to awaken at last. Something of great import is stirring. It is the awareness, gradually spreading from ordinary citizens to their governments, that a Europe that turns its face against the plight of the refugees is a Europe that is killing itself.

Millions of European citizens have rediscovered their power to imagine the truth that the alternative to a collective and compassionate response to the plight of the refugees is not a safe, secure Europe thriving behind its walls and wire. It is a Europe that has lost the humane values without which it cannot hold together.

Europe has needed a project to remind itself of why it had a hold over the imaginations of hundreds of millions of people, not as a place merely but as an idea. History has dealt it a project no sane person could ever have wished for – to give shelter and succour and dignity and hope to millions of desperate people from across the Mediterranean. But that’s the one we’ve got and it is not ignoble. In forcing Europe to rediscover the wellsprings of collectivity and compassion, the refugees are not a threat to European civilisation. They may just be its saviours.

1 Maureen Dowd: Biden has his limitations but he’s no Trump
2 US passengers fly into Dublin: ‘I’m here for six days. I guess I’ll have to stay inside’
3 Keith Duggan: Bubba Wallace tweet shows just how troubled Donald Trump’s mind is
4 Forget bulging muscles; strength is all about nerves
5 Quarantine process to be tightened as health officials grow nervous
Real news has value SUBSCRIBE