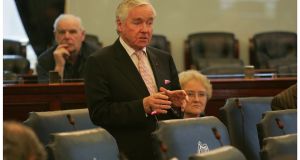 When I look back at my 23 years as a member of the Seanad, one of the things I really found frustrating was the way in which the government of the day would routinely reject private members’ Bills – principally Bills which have been produced by members of the opposition.

In recent weeks the previous minister of state Ged Nash signed an order which paves the way for the Construction Contracts Act 2013 to have full effect. I initiated this legislation as a Bill in 2010, and it becomes law on July 25th. This legislation will be really valuable to those working in the construction sector, a sector very harshly hit by the economic downturn.

They say a week is a long time in politics, but it took my Bill 319 weeks to go through the Seanad and the Dáil and to finally become law.

At the other extreme we have seen several occasions in which government legislation, aided by the application of a parliamentary guillotine, has been rushed through both Houses of the Oireachtas in less than a day.

Neither of these approaches is a good way to run our legislature.

In the last 10 years only three other private members’ Bills which have originated in the Seanad have been enacted.

In view of the fact that numerous private members’ Bills are published each year, this track record reflects very poorly on the openness of governments.

But there are signs that this may be about to change.

The agreement between Fine Gael and Fianna Fáil which underpins the Government contains a significant pledge to “allow any opposition Bills… that pass Second Stage, proceed to Committee Stage within 10 working weeks”.

However, with this right to have their private members’ Bills progress through the Dáil, members of the Opposition also have a responsibility to bring forward legislation which is credible and, of course, constitutional.

Some will struggle with the need to resist the temptation to bring forward legislation which is populist or simply unworkable, but if this new openness to ideas from the Opposition benches is to thrive there is an onus on all members of the Houses to value this opportunity and use it sensibly.

The pledge in the Fine Gael-Fianna Fáil agreement speaks volumes about the Executive’s dominance over the Dáil and the Seanad.

It shouldn’t be a surprise that a government would commit to listening to proposals from the opposition benches but in fact it is.

Why is it that successive governments have been so resistant to ideas from across the floor?

Why is it that the attitude taken by the recent Fine Gael-led government did not materially differ from the wholesale dismissive approach invariably adopted by previous Fianna Fáil-led governments?

Shallowness The answer to this perhaps lies in part in the insecurity and shallowness of individual ministers and their advisers.

On one occasion when I was seeking agreement to allow one of my Bills to pass through Second Stage unopposed, I was told by a ministerial adviser that the minister could not be seen to be upstaged by me progressing the topic in question ahead of him.

However, ministerial advisers are not the only obstacle.

The Civil Service serves a valuable role in the administration of the State, and very many senior civil servants are utterly professional.

However, many see themselves as guardians of the status quo, and their instinctive reaction is to reject any proposals which are put forward by people outside their ranks.

The less independent-minded ministers are content to allow the civil servants excel in that role.

In short, they wield far too much power. It is this consideration, perhaps more than any other, which has resulted in ministers habitually rejecting private members’ Bills.

If a minority government is to function in the Dáil, and if it is to secure the co-operation of the Seanad, then an entirely new approach to policy and law-making must become reality.

The new Government must live up to the commitment which has been made in the agreement which it reached with Fianna Fáil.

But the corollary of this is that members of the Opposition also must act responsibly as legislators for all of the people, and not just for populist causes.