The Irish Times View: Tom Humphries, a betrayal of trust 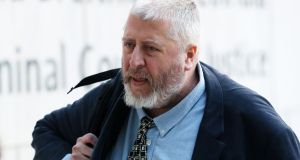 The criminal justice system regularly stands witness to terrible acts by those we characterise as ordinary people. Where they have done extraordinary wrong and wreaked havoc on the lives of their victims and those around them. More than most, Tom Humphries now personifies that reality.

In the heat of the controversy that erupted – rightly – over the leniency of the 2½ year sentence imposed on him at Dublin Circuit Criminal Court, one fact stood supreme: Humphries is a convicted sex offender. It doesn’t matter what he once was or that, as one of the leading journalists of his generation, his pen could build or topple the grandest of reputations. That is in the past. All that is important is that he flagrantly abused his position as a part-time GAA coach, and the imbalance of power in his favour, to take advantage of a teenage girl three times his junior. In the process – in her own words – he deprived her of her childhood.

The court was told earlier this month that Humphries sexually abused the teenager on five occasions after grooming her from the age of 14. In one three-month period, he exchanged 16,000 text messages with her. Such frequency is almost beyond comprehension. He also faced charges relating to a second girl which were dropped last June. His crimes came to light by chance when his daughter found images on an old mobile phone. Yet his victim found the courage to tell of her ordeal and the compassion to thank the Humphries family for reporting him and “saving me from the situation”.

Today’s proceedings were the conclusion of a criminal process which dates back to early 2011 when the Garda first began an investigation. Humphries stopped writing for this newspaper at that time and was later suspended and then dismissed. He spent extended periods under medical treatment and supervision and, at times, it appeared a successful prosecution would never materialise. But the process kept moving, however painfully. It culminated with a sentence that, even allowing for the detailed rationale set out by Judge Karen O’Connor, including his guilty pleas, was unacceptably lenient.

It is easy to demonise Humphries given the nature of his crimes. But it would be a mistake to dehumanise him. That would strip him of agency and responsibility which rest solely with him. Among his greatest betrayals is of the ordinary trust that empowers us to hand over the care of our young people to those we believe will protect them in sports clubs and other settings.

Humphries was not part of some ill-defined group of “others” who do wicked things. He was a familiar face and a trusted one. Rather than fear of the unknown, he – and sex offenders like him – make us afraid of the known and suspicious of the ordinary. That is extraordinarily damaging.

1 Cork shootings: Gardaí find lengthy apparent suicide note on one of the dead men
2 Róisín Ingle: Five small ways to find joy in a pandemic. Only one of them is illegal
3 Ciara Kelly: I was pregnant, unmarried, a junior doctor and I got old-school comments
4 Michael McDowell: We must check if this Covid-19 lockdown is really necessary
5 Former solicitors ran an ‘identity factory’ in committing fraud – court told
Real news has value SUBSCRIBE