The Irish Times view on press freedom in Myanmar: outrageous and wrong 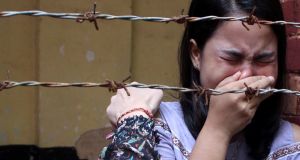 The jailing of two Reuters journalists in Myanmar is an outrageous attack on press freedom and another sign that the rule of law in the country is under grave threat.

At the time of their arrest last December, Wa Lone (32) and Kyaw Soe Oo (28) were investigating the killing of 10 Muslim Rohingya at the hands of Myanmar soldiers and Buddhist villagers in Inn Din, a village in the north of Rakhine state.

Prosecutors accused the men of breaching the colonial-era Official Secrets Act by obtaining sensitive state documents. But the journalists said they were framed by police, who invited them to dinner and handed over the documents minutes before they were arrested. Kyaw Soe Oo said that while being investigated he was deprived of sleep, forced to kneel for hours and had a black hood placed over his head. “We know we did nothing wrong,” Wa Lone said after the seven-year sentence was handed down. “I have no fear.”

The court’s decision comes at a time of intense scrutiny of the country. A United Nations fact-finding mission said last week that Myanmar’s military carried out mass killings and gang rapes of Muslim Rohingya with “genocidal intent” and called for top generals to be prosecuted. More than 700,000 stateless Rohingya have fled across the border to Bangladesh since that military campaign, according to UN agencies.

Last week’s shocking report was greeted with continuing silence from Myanmar’s de facto leader, the Nobel peace laureate Aung San Suu Kyi. Her disgraceful behaviour has left her discredited and in time could result in international sanctions. In her previous incarnation as a voice of moral indignation, Suu Kyi would have stated the obvious: Wa Lone and Kyaw Soe Oo have been jailed for getting too close to the truth. They must be released immediately. And those who run the regime that jailed them must be held to account.