Unions are sounding alarm at any plan to separate the orchestras, suggesting it would be an erosion of RTÉ’s public service role 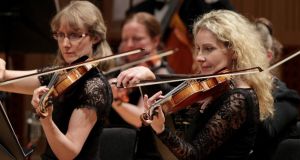 It was a remarkable achievement that, in the early lean years of the State, the genesis of our national orchestra became a priority within Radio Eireann, precursor of today’s RTÉ. Photograph: Mark Stedman

There is a certain lack of harmony between the recent announcement of State investment of almost €80 million towards the redevelopment of the National Concert Hall and this week’s review pointing to an uncertain future for the RTÉ National Symphony Orchestra (NSO). Although the provision of a world-class venue is to be welcomed, this would be a hollow temple of bricks and mortar if it were without the continued participation of the orchestra as a vital component of its programme. It would, as the Boaden review states, constitute “a major diminution in the nation’s cultural and artistic life”.

The orchestra, which has earned its place as one of our national assets, has been under threat for some time due to the national broadcaster’s claim that it can no longer bear the cost of two orchestras. Whether the review’s proposal that the NSO should receive direct government funding, with the concert orchestra remaining RTÉ’s responsibility, is truly “a way forward” – as Minister for Culture Josepha Madigan seemed to suggest – remains to be seen. Unions in RTÉ are already sounding alarm at any plan to separate the orchestras, suggesting it would be an erosion of RTÉ’s public service role.

The orchestra comes under the remit of the Minister for Communications but it now appears its future is dependent on the Department of Culture and Heritage taking it into the fold of national cultural institutions. That may be the only solution to guarantee its survival, but a long history of underfunding for cultural institutions does not inspire confidence in this idea.

It was a remarkable achievement that, in the early years of the State, the genesis of our national orchestra became a priority within Radio Éireann, precursor of today’s RTÉ. The station was charged with bringing classical music to the Irish public, a role it has fulfilled over many decades. In a year that marks the 70th anniversary of the foundation of a fully-fledged National Symphony Orchestra, it is regrettable that its role at the forefront of symphonic music in Ireland has some doubt hanging over it.