Irish Times view on elections in Zimbabwe: democracy under challenge 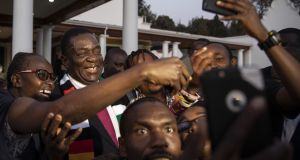 President-elect Emmerson Mnangagwa steps on to the lawn to pose for photographs and selfies after attending a press conference in Harare, Zimbabwe. Photograph: Dan Kitwood/Getty Images

Zimbabwe’s landmark elections this week combined political enthusiasm and high voter turnout, a tight contest for the presidency, and destructively brutal army attacks on protesting crowds before that result was announced. The 50.8 per cent victory for the ruling Zanu-PF candidate Emmerson Mnangagwa is strongly challenged by his main opponent Nelson Chamisa of the Movement for Democratic Change and its probity questioned by election observers. This uneven combination is bad for a country sorely in need of international support and investment as it makes the transition from the repressive, isolated and impoverished regime presided over by Robert Mugabe since the 1980s.

Mugabe was overthrown in an army coup last November amid widespread popular celebrations. Mnangagwa, his long-standing intelligence chief took over during the transition, committed to free and fair elections and a programme of aid and economic renewal to flow from the relaxation of international sanctions. Arrangements to hold parliamentary and presidential polls proceeded well and opposition parties were able to organise. But the election observers have this week confirmed an overwhelming media bias against the main opposition party, that voters were intimidated in certain areas and that the official election commission lacks transparency. They seek confirmation of the close presidential result which avoids a runoff.

A lot now depends on how Nelson Chamisa and his movement respond to these events. They talk of mounting a legal challenge and refuse to order their supporters off the streets but know how perilous it could be to reject the results altogether. Voting in Zimbabwe’s 10 mostly rural provinces gave a solid victory to the ruling Zanu-PF in the parliamentary elections, whereas the presidential ones were much closer. The Harare and Bulawayo urban voting was strongly in favour of Chamisa. This varied pattern reveals expected regional and urban-rural contrasts and strongly justifies the election observers’ calls for detailed polling results to be published and legally assessed.

The results show Mnangagwa is substantially less popular than his party. He is a front man for the regime but whether he controls it is questioned by the decision to use the army and not the police against protesters in Harare this week. Six people are reported to have died. Observers suspect a different faction in the military, less committed to change and more afraid of losing power, was responsible.

It sets back Zimbabwe’s hoped for reputation as a potentially stabilising and democratic country managing this transition effectively. Such an outcome is deserved by its voters’ commitment to democratic change. It now falls to its political leaders in power and opposition to ensure this opportunity for renewal is peacefully realised.

1 Anne Enright: ‘Nuala O’Faolain was an impossible person, to whom we owe so much’
2 Keith Duggan: Bubba Wallace tweet shows just how troubled Donald Trump’s mind is
3 Cluster of Covid-19 infections at Kerry ‘house party’ investigated
4 Thandie Newton names names. Will Hollywood punish her?
5 My marriage is boring and polite. How do I make my husband interested in me?
Real news has value SUBSCRIBE