Eamonn McCann: Why Chagos Islanders should be hailed as heroes 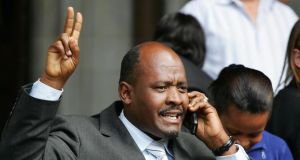 Above, Louis Olivier Bancoult, chairman of the Chagos Refugees Group, celebrates outside the High Court in central London, in 2007 after it upheld a ruling letting families return to their Indian Ocean island homes, from where they were forced out 30 years ago to make way for a US military base. Photograph: ADRIAN DENNIS/AFP/Getty Images

In The Hague last month, the United Nations Permanent Court of Arbitration found that the United Kingdom’s declaration in 2010 of a Marine Protection Area around the Chagos Islands in the Indian Ocean was illegal. The decision endorsed the claim of the government of Mauritius that the UK did not have jurisdiction to make rulings relating to the status of the area.

The finding marked, if not the end, at least, it is hoped, the beginning of the end of the Chagos Islanders’ long legal battle to be allowed to return to the homes from which they were deported in 1973 and deposited in Mauritius more than a thousand miles away. The intention was to facilitate construction of a US military base. The deported islanders numbered fewer than 2,000. Many have since died, some, say the islanders, of sadness. Along with first and second generation, there are now about 2,500 exiles. A majority still live in dire circumstances in Mauritius.

For many years their plight was ignored by the “international community”. Their treatment illustrates as clearly as any action by major powers in recent decades the contempt in which lesser breeds are held by powerful states asserting that their security interests trump human rights anywhere in the world.

French law recognised the islands as part of Mauritius. When control of Mauritius was passed to the British in 1814 as part of the settlement which ended the Napoleonic Wars, the islands came as part of the package. However, when Mauritius gained independence in 1968, the Labour government of Harold Wilson insisted on retaining the islands, now renamed the British Indian Ocean Territory. The reason became clear three years later when the US military decided that the largest and only inhabited island, Diego Garcia, was a perfect place for a military base. Wilson’s administration agreed, without consultation with Mauritius and without its knowledge.

In return, Britain got a discount from the US on the purchase of Polaris nuclear missiles. Two years later, the “cleansing” of Diego Garcia – the term was used by a foreign office official – was under way. Herded on to cargo ships, the islanders were taken first to prison camps on the Seychelles, then trafficked to Mauritius.

A memo from FO permanent under-secretary, Sir Paul Gore-Booth, told the Americans: “There will be no indigenous population except seagulls.” Another official scrawled a note on the margin: “Along with the birds go some Tarzans or Men Fridays.”

The islanders launched legal actions successively in the British, the American and European courts, with the pro-bono assistance of UK lawyer Richard Gifford and journalists including John Pilger and the presenter of the BBC’s Countryfile programme Ben Fogle. Fogle says he became involved because, “The story makes me ashamed to be British”.

In 2009, Gordon Brown’s government devised a plan to turn thousands of square miles around the islands into a Marine Protection Area, ostensibly to conserve the coral reefs and diversity of sea life.

British environment minister Ed Miliband hailed the move as proving Labour’s green credentials. In 2010, WikiLeaks published a US memo quoting FO official Colin Roberts (now governor of the Falklands/Malvinas) saying that, “Establishing a marine park would, in effect, put paid to resettlement claims of the archipelago’s former inhabitants”. It went on: “Roberts believed that the UK’s environmental lobby is far more powerful than the Chagossians’ advocates.”

Diego Garcia now houses 5,000 US service personnel, a squadron of B-52 bombers, 30 warships, a satellite spy system, a nuclear storage capacity, a bowling alley, a cinema, a bank, a chapel, a nine-hole golf course and a prison. Bombers take off to dump their loads on countries which the US believes it must subdue. Planes carrying prisoners stop off en route to CIA torture sites, or deliver captives for torture on the island itself.

There is no legal route to an appeal against last month’s decision. Still, the UK and US may simply refuse to obey the court. Pressure from other countries, such as Ireland, could help tip the balance. The Chagos Islanders are meantime entitled to be hailed as heroes of the struggle for justice across the world.