Eamonn McCann: The half-dead zombie markets are feeding on the living

‘One of the reasons the reality of the markets can still seem mysterious is that their workings remain obscured behind distorted concepts, junk language’ 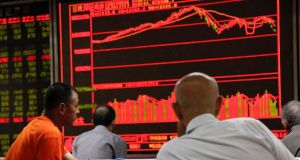 Ripples from the China crisis: markets everywhere have been afflicted by a bad case of the vapours. Photograph: EPA/ROLEX DELA PENA

As the China crisis ripples and rumbles across the world, markets everywhere have been afflicted by a bad case of the vapours. And when investors are anxious, they don’t invest. The diagnosis came from a qualified expert on Channel 4 News.

Over on BBC Radio Four, another expert offered an adjacent explanation. “Investors are just scared.” Of what? “When everybody around you is scared, it’s hard not to get scared yourself.”

As exact an example as we are ever likely to find of fear of fear itself.

Fear? Some of the markets are nervous wrecks. The nightly updates on the health of the markets carry echoes of concerned BBC reporters standing outside hospitals delivering sombre bulletins on the progress of royal illnesses. The markets are “rallying”, or “faltering,” or “sinking”. The major outlets probably have their funeral coverage and obituaries in the can already. Born in the 16th century, the markets were throughout their life martyrs to a wide variety of ailments and assaults, which they always managed triumphantly to overcome until the turmoil of the last few years. Much missed by a loving circle of distraught billionaires.

The answer, said Financial Times US managing editor Gillian Tett, was to burst the chains of Stalinist control and let the market rip freely through society. This would not only reinvigorate Chinese manufacturing, but, by boosting demand in the world’s most populous country, would help save the rest of the globe from possible ruination.

I recently heard Stephanie Flanders, formerly BBC economics correspondent, now European boss of JP Morgan Asset Management, explain that it was impossible to say how the world might look tomorrow because the markets had “decided to wait and see.”

At the height of the Greek crisis a few weeks ago, an agency report told how governments were waiting anxiously for the “verdict of the markets” on the outcome of an EU summit.

So even in their current condition of migraine headaches and chaotic decrepitude, the markets can arrive at decisions, deliver judgments, punish or reward according to assessments of future profitability. It’s as if the markets presented themselves alternately as human beings prone to mood-swings and an elemental force of nature, like wind, rain, lightning, unpredictable, uncontrollable, sustaining life or wreaking destruction. The Romans saw gods in that light. It would be perilous to the point of stupidity to ponder whys or wherefore.

Markets are all-powerful and, even in what’s seen by some as death throes, can be capable of remarkable resilience. They say it’s hard to kill a bad thing.

What’s most strange about all this, given that the markets were widely reckoned to have died or at least to have slouched back into their lairs in shame at the tail-end of the last decade, is that the self-same market cheer-leaders continue to extol the system’s virtues and urge us to accept that no alternative is possible.

One of the reasons the reality of the markets can still seem mysterious is that their workings remain obscured behind distorted concepts, junk language and cloudy jargon, designed, probably deliberately, to bamboozle outsiders. Insofar as we manage to glimpse a human face, it’s a composite of bankers and borrowers, buyers and sellers, currency speculators, hedge-fund managers, the bosses of investment banks, holders of collateralised debt obligations and suchlike, even owners of businesses which actually make stuff, and the busy bees who finesse tax liabilities and devise the exotic products. It’s when they move hither and thither in herds, drawn by the scent of profit or leaving behind swathes of terrain which they have denuded of all sustenance, that they can be seized by panic and trample all in their path, stampeded by greed and fear of being left behind.

They can live for a succession of human lifetimes, it seems, until there is nothing left to consume, or, alternatively, they have been brought to extinction. I am told by a 10-year-old, the appropriate age for this sort of expertise, that chain-saws work well. In the meantime, to while away the time as we wait, we might lend an ear to the Happy Enchiladas’ classic The Money Man’s Dead. “Did anybody see how it happened?/The money man’s dead/Who killed the money-man/They can’t blame the Taliban.”