Eamonn McCann: Mother Teresa not such a good role model

Canonisation an exercise in propaganda – which is, of course, the salutary point 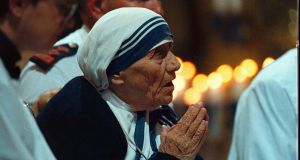 “Mother Teresa’s statement to the UN conference was dishonest, manipulative opportunism for which it is hard to find adequate words.” Photograph: Alan Betson/The Irish Times

It’s not the fact that Mother Teresa has been credited with cures for which there is no known disease that renders the plan for her canonisation ridiculous. The ridiculousness lies in canonisation itself.

Not even the pope is authorised to hand out ceremonial passes to paradise. To qualify for canonisation, you have to have made the cut and be resident in heaven already. If you’re not in, you can’t win. All of which renders the elaborate ceremony planned for next year redundant – apart from its propaganda value, which is, of course, the point.

Propaganda has always been the name of the canonisation game. The main reason medieval popes came up with the idea was so the church could take control of the selection of role-models for society at large. It’s about shaping the world the way you want it to be, about power and influence, not holiness and prayer.

What model of society does the Albanian nun exemplify? Twenty years ago, in January 1996, writing for Hot Press, I phoned the Los Angeles district attorney’s office to check whether there had been progress in persuading Mother Teresa to hand back a million dollars stolen from the poor. Not a lot, assistant district attorney Paul Turley told me.

Keating had siphoned $225 million from the accounts of thousands of victims, and had bunged a million of this loot to Mother Teresa. (The closest Irish equivalents of US savings and loan associations are credit unions.)

Four years earlier, in 1992, Turley had appealed to Teresa: “If you contact me, I will put you in direct contact with the rightful owners of the property now in your possession.” Any developments since, I wondered?

“She has ignored us,” Turley told me. “We have honestly given up on this. It is obvious she is determined to keep it.”

Sentenced to 10 years, Keating may have taken comfort from contemplation of the crucifix on the wall of his cell personally blessed by Pope John Paul and delivered by a messenger from Mother Teresa.

It has commonly been suggested, including in recent days by commentators sceptical about Mother Teresa’s sanctity, that in this and similar matters she had been blinded by intense religiosity, her mode of thought too other-worldly to appreciate mundane stuff like money.

As an excuse for the criminal offence of knowingly receiving stolen property, this would be laughed out of any court in the land. Thomas “Slab” Murphy had a better defence.

A more subtle argument advanced by Catholic traditionalists is that what matters most at a time of ideological turmoil and creeping secularisation within the church is the unwavering adherence and global witness she gave to the teachings of the church now most under siege, on contraception, divorce, abortion etc. It is this, they suggest, which, despite all, makes her a suitable role model for the times we live in.

But this won’t wash either. The journalist Daphne Barak quoted Mother Teresa in April 1996 in Ladies’ Home Journal, commenting on the break-up of the marriage of Princess Diana and Prince Charles. “I think it is such a sad story. Diana is such a sad soul . . . You know what? It is good that it is over. Nobody was happy. I know I should preach for family love and unity, but in their case . . . ” Then her voice “trailed off.”

The masses are told under pain of hellfire that they must unquestioningly obey the rules of the church, but when it comes to the useful rich and glamorous, immutable laws of God can be amended on the instant.

In October 1994, Mother Teresa sent a message to the UN International Conference on Population and Development in Cairo, pleading for outright rejection of contraception and abortion. “Every child is a gift from God. If you have a child you think is unwanted, give that child to me. I will find it a loving home where it will be cherished as a blessing.”

In the year before her death in 1997, as a team of doctors flown in from around the world tried by extraordinary means to bring her back to health, one Irish newspaper carried the headline, “World Unites in Prayer For ‘Living Saint’”.