Eamonn McCann: MI5 has control of most sensitive aspect of policing in North

Unaccountable body consorted with terrorists and indulged in perjury 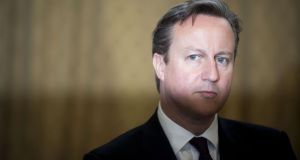 Finucane family hoped David Cameron (above) would tell them face-to-face that he had given the go-ahead for the public inquiry promised by Tony Blair. Photograph: Peter Macdiarmid/Getty Images

‘Cameron went completely off script at that point and he said: ‘Look, the last administration couldn’t deliver an inquiry in your husband’s case and neither can we.’”

“This place” was 10 Downing Street. The occasion was a meeting in October 2011 between the prime minister and members of the family of solicitor Pat Finucane, murdered by the UDA in 1989. Winter accompanied the family. They had travelled to London at the invitation of the Northern Ireland Office, believing/hoping that Cameron was to tell them face-to-face that he had given the go-ahead for the public inquiry into the killing promised by Tony Blair a decade previously.

The question which immediately arises is: who around Downing Street would have had the clout to forbid a prime minister from following a particular course? Senior civil servants? Hardly. Sir Humphrey doesn’t deliver instructions but rather offers advice. But MI5 fits the bill. It is difficult to think of any other group which does.

If this be the truth of it, Cameron was telling Ms Finucane that an organisation that both were aware had played a key role in the murder of her husband was refusing to contemplate a public inquiry into the crime and that he had no choice but to comply. (John Ware’s 2002 Panorama investigation had exposed MI5’s role in facilitating the UDA’s killing spree against Catholics.)

MI5’s ability to dictate the terms on which its activities might be examined had been on open display at the Bloody Sunday inquiry in May 2003. At one point MI5 officer “Julian” – he gave evidence anonymously, by video link from an unidentified location – referred to a device called an “Alvis”. Barry McDonald QC, for a number of the families, asked: “What is an Alvis?” Inquiry counsel Alan Roxburgh intervened: “Before the witness answers that question . . . I understand that (MI5’s) position may be that they are content that it should be indicated that Alvis was a means of communication, but not to provide further details . . . I will be corrected if I am wrong by Mr Sales.”

Saville: “I think you will have to leave that there, Mr McDonald. I am sorry.”

And there it was left. Sales was to intervene on about a dozen occasions to indicate what questions MI5 would like disallowed. Each time, the agency’s requirement was met, without discussion.

One MI5 witness told the inquiry that he had been advised in advance by one of Saville’s own lawyers what questions he might reasonably refuse to answer when giving evidence. Although lawyers for the families expressed astonishment, the matter was not pursued.

Astonishment might have been the appropriate response, too, to the bizarre (or so it would seem in any other context) government intervention in 2010 in the case of Binyam Mohamed. He had alleged MI5 involvement in severe ill-treatment which he had suffered while held in a CIA “black site”.

In a draft judgment, the third most senior judge in England and Wales, master of the rolls Lord Neuberger, was sharply critical of MI5’s actions both in relation to Mohamed’s treatment and then in the course of the court proceedings. Gordon Brown’s government responded by writing privately to Neuberger stating that the judgment as it stood would be “exceptionally damaging” to MI5 and suggesting that he change it. The notion of judicial independence had been discarded.

We can but guess who it was who advised Brown to butt in on a judge between the end of court proceeding and delivery of the judgment. In any other circumstances, the concept of contempt of court might have come into play.

An entirely unaccountable organisation which has been shown to have consorted with terrorists and to have indulged in perjury and politically-motivated murder has apparently unchallengeable control of the most sensitive aspect of policing in the North. It is puzzling that this isn’t a matter of constant controversy.

1 Michael J Fox: ‘In the wheelchair, I’m luggage. No one listens to luggage’
2 The Crown’s Josh O’Connor: ‘I’m a republican. I’m not interested in the royal family’
3 Ireland could lose out as France lays claim to most of €5bn Brexit compensation fund
4 Top up your pension, there’s still time
5 Alison Curtis: My guilt at not going for a second pregnancy
Real news has value SUBSCRIBE