Eamonn McCann: Are there signs of a ‘pro-life’ group influence in HSE document? 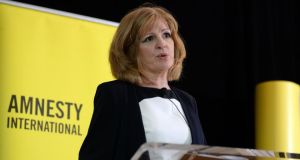 Gaye Edwards at the launch of the Amnesty International Ireland report ‘She Is Not a Criminal’, in Dublin. Photograph: Eric Luke / The Irish Times

Language is important in discussion of abortion. To refer to someone on either side of the debate as “anti-choice” rather than “pro-life”; or as “pro-abortion” rather than “pro-choice”, is to take a position on the core element of the argument. This consideration casts an intriguing light on one section of the Health Service Executive’s consultation paper, Bereavement Care Standards following Pregnancy Loss and Perinatal Death, published last week.

The consultation process, which ends on September 11th, will inform drafting of the final document. The HSE explains that the care standards it recommends “will be implemented and applied across the health service in all appropriate hospitals and settings”.

These are the standards, then, that will govern the care to be offered to women in the position of, for example, Savita Halappanavar or Gaye Edwards. The case of Halappanavar, who, 17 weeks pregnant, died in University Hospital Galway in October 2012, is well known across the world. Edwards had travelled to England in 2001 to terminate a pregnancy, having received a diagnosis that the foetus had a fatal abnormality. Termination was not, of course, available in Ireland.

Speaking last month at the launch of Amnesty’s abortion report She is not a Criminal, Edwards recalled that in England she and her husband, Gerry, had found “sympathy and compassion that had been absent in Dublin.” Gerry told the Irish Examiner: “If we had continued in our hospital . . . our families could have seen him, we could have waked him, he could have had a funeral.” The remains were delivered to the Edwardses days after their return to Ireland, in a Jiffy bag.

Edwards had an obvious interest in the production of the new guidelines. She attended an “information session” organised by the HSE last month, and, under embargo, had sight of the draft of the consultation document. In a letter this week to Amnesty and the coalition for repeal of the eighth amendment to the Constitution, she recalled: “What struck me was that there was no reference made to patients like me who had received a prenatal diagnoses of fatal foetal abnormality. There were, however, frequent references to life-limiting conditions.” The word “fatal” is crucial here.

Many people generally opposed to abortion make an exception where the medical opinion is that, effectively, the chances of a baby being born and surviving are nil. Telling a woman in this situation that, whatever the depth of the pain of her loss or her own conscientious beliefs or the implications for her own life, she must carry the pregnancy to full term, strikes many, including some who are far from pro-choice, as pointless cruelty.

It is this context that the absence from the consultation document of the phrase “fatal foetal anomaly” (or “abnormality”) and the inclusion in its place of “life-limiting condition” assumes significance.

In a letter last month to one of the document’s drafters, Edwards pointed out: “The term ‘life-limiting condition’ is only ever used by those who identify themselves as ‘pro-life’, in other words those who disapprove of terminations even in tragic situations like ours. To see a document so obviously heavily influenced by those people and organisations can only have the effect of further isolating and excluding bereaved parents who have gone down the route of terminating their doomed pregnancies.”

She says the information session she attended was attended also by “two stridently ‘pro-life’ groups”. Her impression was that “they had already had a significant input into the document . . . If I were a recently bereaved parent after terminating a pregnancy for fatal foetal anomaly, I would simply assume that you made no provisions for me or my family.”

Suggesting on this basis that “pro-life” lobbyists had succeeded in having the wording of an imminent official document changed to shift its meaning closer to the “pro-life” position may seem to be stretching it a bit. But a curious confusion in the document’s glossary of terms may help towards understanding. The list of terms is arranged alphabetically – except in one instance. “Life-limiting foetal anomaly” is printed out of sequence, between “end-of-life care” and “grief”. Had the phrase opened with “fatal” it would have properly fitted into the slot where it appears.

A HSE spokesperson said the phrase “fatal foetal anomaly” appeared in the “feedback form” accompanying the consultation document – but offered no comment on the out-of-sequence reference to “life-limiting condition” or on Edwards’s suggestion that this phrase had been inserted into the text at a late stage to replace another beginning with a word beginning with “F”.

Referring to the support group she helped found in 2012, Edwards said: “None of us in Termination for Medical Reasons for Ireland/Leanbh Mo Chroí ever heard this term [life-limiting condition] in a clinical setting.”

If the explanation of the glossary error implied here is wrong, perhaps the HSE will suggest another, and explain how it came about.

1 Coronavirus: One death, 25 new cases reported in State
2 ‘My rent here is so low it’s a joke’
3 Johnny Depp: Ex-wife or friend defecated in bed in ‘fitting end’ to marriage, court hears
4 This charming man: how Paschal Donohoe won the Eurogroup presidency
5 Children who go abroad must self-isolate for 14 days before return to school in September
Real news has value SUBSCRIBE