It’s okay for President Obama to wipe away a tear in public, but then he’s an American 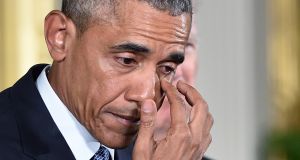 “Check that podium for, like, a raw onion or some No More Tears”. Photograph: Mandel Ngan/AFP/Getty Images

It didn’t take long for the National Fruitcake Club to pull on tinfoil hats. Shortly after footage emerged of President Obama crying while discussing the Sandy Hook shootings, the usual band of conspiracy maniacs set to explaining how he pulled this off. Note how he touches his eye before the tears start to flow. “He’s putting something in his eyes to create the fascist tears,” John Nolte of the notoriously illiberal Breitbart news website noted. Andrea Tantaros from Fox News wanted to “check that podium for, like, a raw onion or some No More Tears”.

So far, so predictably barmy. President Obama was announcing an executive order on gun control. As I understand it, the regulation may, under certain circumstances, require convicted mass murders to wait a day before delivery of a rocket launcher.

This does not sound like much to us. To the folk at Breitbart and Fox, however, such an order is tantamount to an abolition of democracy. Of course they were going to attempt to discredit President Obama.

Here’s the interesting question. Why might it be viewed as a “good thing” for the president to show his emotions so publicly? Politicians have, in the past, seen campaigns falter when they reached for the handkerchief. Many voters think it wise for presidents and prime ministers to keep a check on extreme emotion.

It’s different for Americans. Citizens of the United States are forever opening up and allowing their emotions to spill out. One barely has time to disembark the aircraft before some person at the car rental desk has broken into floods of inexplicable tears.

We like to think of the English as having a stiff upper lip, but the Irish are almost equally embarrassed by violent displays of emotion.

Yet even in American politics, crying can get a politician into trouble. The case of Senator Edmund Muskie reminds us that, despite the rise in attack ads and media bellowing, US politics were, not so long ago, a deal nastier than they are today.

In 1972, as Watergate began to simmer, Muskie, front runner for the Democratic Party, was subject to a horrendous barrage of slurs and slanders.

Hunter S Thompson (as brilliant as he was unreliable) spread the rumour that the senator was addicted to a psychedelic drug. On the eve of that state’s primary, a conservative New Hampshire paper alleged that Muskie had insulted French Canadians and claimed that his wife was drinking heavily. Making a defence of Mrs Muskie outside the paper’s offices, the senator appeared to break down. He later claimed that the “tears” were melting snowflakes, but the suggestion that a grown man might cry in public did for his campaign.

Would President Obama suffer if he wept while defending Michelle from a similar attack? It seems unlikely.

In the decades that followed, the US became more relaxed about politicians crying. Indeed, conspicuous displays of patriotism now trigger mass waves of sobbing among Republican representatives.

John Boehner, the former speaker of the House of Representatives, broke down so often he came to be known as “the Weeper of the House”. Nancy Pelosi, Boehner’s predecessor, did raise an eyebrow at the waterworks. “He cries sometimes when we’re having a debate on Bills,” she said. “If I cry, it’s about the personal loss of a friend or something like that. But when it comes to politics – no, I don’t cry.”

Nonetheless, the blubbing never did for Boehner as it did for Muskie.

We haven’t quite worked out what we think about grown-up crying in this part of the world. It seems acceptable to weep for utterly trivial reasons and when confronted by great personal tragedy.

Men and women positively brag about sobbing during the last act of Brooklyn. No decent person would object to somebody crying at the death of a relative. It’s the space in the middle that causes difficulties.

You’re crying because you didn’t get a promotion? You’re blubbing because your holiday is over? Pull yourself together, for heaven’s sake.

We found Paul Gascoigne’s tears charming because, in 1990, we still thought of him as an overgrown child. If your own brother did such a thing you’d give him a bloody good shake.

A British or Irish politician would – even when considering something so appalling as the dead children of Sandy Hook – be less likely to allow emotion to overcome them.

Mrs Thatcher offers an interesting example. For 10 years the Iron Lady kept herself together until she encountered the one tragedy that proved emotionally insurmountable: her own downfall.

Let’s be kind and believe that she gave in to tears because she knew impressions no longer mattered.