‘Good sleggin’. We love this sort of thing. Surely, murals of Kit Harington were set to appear on gable walls throughout the occupied territories?’ 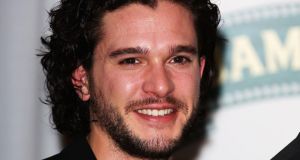 In an interview on US television, Kit Harington coined a few disobliging phrases about Northern Ireland – where ‘Game of Thrones’ is filmed – and caused weeping and renting of flesh all the way from Enniskillen to Larne. Photograph: Tim P Whitby/Getty Images

There’s a great deal to ponder in Game of Thrones. Barely a moment goes by without a dragon beheading a relation with whom he’s recently had sex. It is not surprising that commentators rarely get around to discussing the comical geography of Westeros.

George RR Martin, author of the source novels, has spread a kaleidoscope of communities across his imagined kingdom, but he has made sure the northerners are as grim and austere as possible. There’s no balmy frolicking among the palm trees in Winterfell. It’s all deep-fried elk and punch-ups outside the Blasted Timber Tavern. The ruling family was named Stark for a reason.

Martin modelled Westeros on Great Britain, but the template could as easily have been Ireland. We don’t breed ninnies in Ulster. While Southerners are forever leaning mildly on dry-stone walls and telling lost foreigners they “wouldn’t start from here”, we’re cracking each other’s heads, scowling at rainbows and – if none of that is frightening enough – being Van Morrison.

We have an awesome sense of humour, but it revolves mostly around sleggin’ (what you probably call “slagging”). “See your one on the telly? Mrs Brown you call her. That’s your Ma, so it is.” That sort of thing. Comedy gold.

We’re tough as nails. Nothing breaks our weather-beaten hides. We positively revel in the verbal argy bargy.

When Seth Meyers asked what the actor might say to anyone planning a trip to Belfast, he replied: “It’s wonderful for two or three days.” The interviewer allowed a pause for laughter and pointed out that Harington had been there for years.

“Five years,” he agreed wearily. Kit then went on a bit of a comic scat.

“They have a wonderful tourist board. They celebrate three things,” he continued.

“Having the most bombed hotel in Europe, which is great. They built the Titanic, which is a ship that sank on its maiden voyage and now they have Game of Thrones, the most depressing TV show in history. So it’s a wonderfully depressing tourist board.”

After all, it’s not as if what he’s saying isn’t true. The obsession with the Titanic in tourism circles borders on the desperate. The city of Friedrichshafen in Baden-Württemberg is smaller and less well-known than Belfast, but you don’t find them bragging about the fact that they built the Hindenburg.

The macabre fascination with the Europa Hotel’s serial immolation reached lunatic proportions decades ago. Two or three days? Two or three days? What are you going to do after you’ve made the seemingly obligatory trip to the Crown Bar and seen the mummy in the Ulster Museum? (I’m not sure if people still do that, but I had to end the sentence somehow.)

Why not spend three minutes on the Celebrity Tree Trail. You’ll find a tree ’n’ plaque dedicated to Cannon & Ball immediately opposite the Grand Opera House. I’ve got a photo of it.

Let’s face it. Strip away the miserable history and Belfast comes across like any other mid-sized city in the United Kingdom: Norwich, Peterborough, Doncaster, Kingston upon Hull. That’s nothing to be ashamed of. Millions of people have lived happy lives in, say, Leicester without marching provocatively down their poor neighbours’ streets for much of July.

Okay, there’s some nice scenery outside Belfast. We should not, however, get too carried away. “Is not the Giant’s Causeway worth seeing?” James Boswell famously asked Dr Johnson. “Worth seeing, yes, but not worth going to see,” the great man replied.

We like sleggin’. We live in an undeniably humble corner of Europe. Of course we’re going to take Harington’s quips with good grace.

That’s not how it worked out. Last weekend, following a blaze on social media, Kit was forced to issue the sort of grovelling apology you would never get from Jon Snow.

“I realised I should apologise. I did not mean it to come across in any way derogatory of Belfast,” he said. Oh well. It’s fair enough I suppose. We can say anything we like about our own family, but if some stranger makes a remark about your dad’s arse you have every right to get angry. Those are the rules.

1 We need to pay very close attention to what is happening in Britain now
2 Normal People Class of 2020: The nine college friends in the series
3 Gabriel Scally warns against ‘rush’ to relax Covid-19 restrictions
4 Simple restorative exercises that can improve your posture after all the sitting
5 Connell losing touch with club championship is real tragedy of Normal People
Real news has value SUBSCRIBE