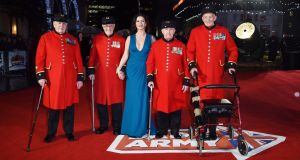 Over the last few months we’ve been hearing much about the unearthing of a legend concerning a bunch of unlikely heroes pitched against an unstoppable evil empire. As Star Wars: The Force Awakens finally begins to lag at the box office, a very different near contemporary resistance has made its way back to the front pages.

It may come as a surprise to learn that there was some overlap between Star Wars and Dad’s Army. In fact, one stepped aside just as the other arrived.

The final episode of the British sitcom was broadcast on November 13th, 1977. Star Wars: A New Hope (as it then wasn’t) had opened six months earlier in the US and would arrive in the UK at Christmas.

One is a slightly creaky old warhorse that fights for contemporary relevance. The other is the greatest situation comedy of all time [dadsarmy.co.uk].

If durability is our measure then Dad’s Army requires no further advocacy. In the four decades since production ended, the show has rarely been off the air. Over recent years the BBC2 repeat on Saturday evening has regularly registered in the top 10 most-watched shows for that station. Those viewers are not all pensioners.

First aired in 1968, the show is occasionally seen as a cosy riposte to the revolutionary chaos that reached a head in that much-ballyhooed year. There is something in this, but such an assessment overlooks the controversy that attended the original production. Offering a precursor of last year’s absurd “famine sitcom” furore, less adventurous BBC executives suggested that the series, focusing on the elderly volunteers in a Home Guard platoon, might risk belittling the generations that stood up to Hitler.

Only two things unfailingly unite these very different elderly gentlemen. One is their opposition to the Nazis. The other is their hatred for the coarse, cowardly Air Warden Hodges (“that awful man!”).

If one wished to get all “media studies” one might point out that the series, like so many British sitcoms, centred itself on a character born of imperial decline.

That nation’s television comedy has, since the Suez crisis, again and again focused on the determined but frustrated front-parlour despot who has less power than he feels he deserves.

Basil Fawlty fumes from a seedy hotel in Torquay. In Rising Damp Rupert Rigsby holds dominion over a decaying rooming house. As late as the current century, David Brent, anti-hero of The Office, feebly finds himself trying to make an empire of a paper company in Slough.

All these institutions are versions of the United Kingdom. None would be recognised by Gen Kitchener

The situation is made more poignant in Dad’s Army by placing the tin-pot tyrant in a perilous situation that attended the last wheezes of imperial pomp. Set at the nation’s finest hour, the show was broadcast during the three-day week, National Front marches and the Grunwick dispute.

The new class struggles are reflected in the series’ social dynamics. Played with exquisite ennui by John Le Mesurier, Sgt Wilson – who went to a “rather good” public school – represents the sort of privileged patrician Tory that Mrs Thatcher resented more than any socialist.

None of this (largely accidental) political commentary would matter much if the series were not chest-burstingly funny.

Croft and Perry’s greatest achievement was their skilful exploitation of a great national resource: the swathe of older character actors about to be left behind by the collapse of the British film industry.

Le Mesurier and Lowe are immaculate. John Laurie is fearsome as the pessimistic Frazer. Ridley is deeply poignant as the elderly and quietly courageous Pte Godfrey.

Incidentally, did you know he is the great uncle of Daisy Ridley, who plays Rey in Star Wars The Force Awakens? This is where we came in.