Donald Clarke: Charleston killings raise the spectre of the T-word

‘If this isn’t terrorism, then nothing is’ tweeted Glenn Greenwald 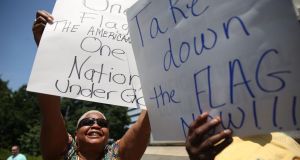 Nobody who has passed through Northern Ireland in July should get too hoity-toity about the controversy concerning the Confederate flag. Photograph: Joe Raedle/Getty Images

The recent killings in Charleston once again invite us to ponder how western Europe differs from the United States. Nobody who has passed through Northern Ireland in July should get too hoity-toity about the controversy concerning the Confederate flag. The US government’s continuing inability to engage with gun control does, however, point up that this really is a whole other country.

When Alice Tripp, senior official in the Texas Rifle Association, argues that nothing in proposed legislation would have stopped the perpetrator carrying out the attacks, her friends elsewhere in the pro-gun lobby nod sagely. In this part of the world we note that this is because none of the restrictions currently under consideration come close to having anything you could call teeth.

A dispute concerning the language to be used about the suspect’s crimes kicks up more slippery and esoteric questions. In the two weeks since Dylann Storm Roof allegedly murdered nine African-American citizens pressure has been growing to identify the crime as “terrorism”.

To describe Roof as “a terrorist” online is, it seems, to advertise one’s empathy with the victims’ community. The argument goes that when a Muslim commits such an offence nobody hesitates to drag out the “T-word”, but white people are rarely so identified.

This “working definition” would come as news to anybody who has been following Irish politics over the past 50 years. Barely a day went past without a newspaper employing the word “terrorism” in relation to a domestic atrocity. The Germans used it in relation to the Red Army Faction. The Spanish described Eta in those terms. They haven’t gone away, you know. Just last week this newspaper reported on the conviction of a dissident Republican leader for “directing terrorism”.

While Greenwald offers reasonable pleas from the liberal left, the primates at Fox News fling their ordure about the pen with characteristic indiscretion. “Not all Muslims are terrorists, but all terrorists are Muslims,” Brian Kilmeade of Fox & Friends famously quipped a few years ago.

All of this seems most bewildering to Europeans. Local disputes over the word have – until recently, anyway – had more to do with ideology than race. If you were a member of the IRA or the UVF then you described yourself as a “volunteer” (or a “freedom fighter”). If you were a police officer trying to combat such paramilitaries then you probably thought of them as “terrorists”. Republicans would swivel the blade and accuse the security forces of “state-sponsored” terrorism. The murk was unending, but nobody had any difficulty appending the T-word to white men and women.

Most lexicographers agree that the term derives from descriptions of Jacobite fanatics in the aftermath of the French revolution. In the following centuries, various definitions have been kicked around, but the word has continued to mean pretty much whatever the user chooses. In 1994, the United Nations General Assembly offered the following description of terrorism: “criminal acts intended or calculated to provoke a state of terror in the public, a group of persons or particular persons for political purposes”. All that’s needed now is a definition of “political purposes”.

The term was used in relation to Timothy McVeigh following the Oklahoma City bombing in 1995. It has been used about the white supremacists who murdered four children in the 1963 16th Street Baptist Church bombing. It was applied liberally to even the most harmless members of the Black Panthers.

The United States had, however, relatively little to do with terrorism between the 1960s and the attacks by al-Qaeda on 9/11. Controversies concerning definition rarely arose before the nation began panicking about supposed threats from Islamic extremists in the current century. Having been out of the conversation for a spell, US legislators and commentators find themselves racing to catch up.

It is unlikely anybody would have thought to call Dylann Roof a terrorist had the crimes he is alleged to have committed been carried out 20 years ago. It matters now because, in the US, the term is being brandished as a racial epithet and a lever against human rights.

Greenwald gets at the heart of it when he says the word “justifies everything yet means nothing”. Domestically, the FBI is suddenly on the case. Overseas, the CIA employs “enhanced interrogation techniques”. It should be a silly semantic argument concerning an endlessly flexible term (after all, is a terrorist any worse than a mere murderer?), but the distinction matters a great deal to those so labelled.

This conversation is far from over.