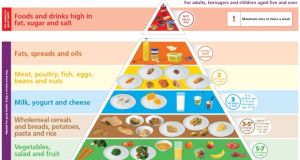 New Food Pyramid: It makes better sense than the previous one, but is still a compromise between science, the Government and the food sector. 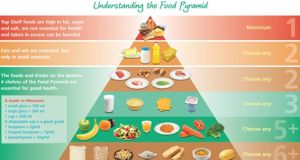 The old food pyramid: Fruit and veg were in the No 2 slot, behind processed breads, rice and cereals.

It is long overdue, but encouraging nevertheless, that the Government has revised the older food pyramid and opted for a new one with more emphasis on fruit and vegetables in its fight against obesity.

These days there is a lot of confusion about what and what not to eat, about what is healthy eating and what is not. Indeed, there are even those who will argue that only “registered dietitians” are allowed to recommend what people should eat.

As a chef, a mother and a cancer survivor, I absolutely do not agree with that. If that were the case, GPs, consultants and nurses would be banned from speaking about diet and telling people about the healthiest options. Take it a step further and parents would not be allowed to tell their children what they should be eating because we are not “qualified”.

Although I am delighted that the Government has introduced a new version of the food pyramid, we must remember that, since 2011, the standard food pyramid was heavily promoted on the website of Safefood.eu, the Irish Nutrition and Dietetic Institute and other organisations. It was quite clearly outdated and should have been binned years ago.

As Ivan Perry, professor of public health at UCC, said recently: “Food pyramids in all countries are a compromise between science, the government and food sector. The idea that they are purely based on nutritional science is not true.”

Ideally, large food manufacturers should have no place in influencing government policy on diet. We have only recently heard how the US sugar lobby in the 1960s paid scientists to blur sugar’s role in heart disease. Naturally, fizzy drinks companies, sweet manufacturers, pasta producers and bread-makers will commercially want to have their input, but should they really be allowed to dictate government policy?

Have a look at the old food pyramid. Was it right that the bottom level consisted of processed, high-carb foodstuffs such as white bread, pasta, rice and cereal? Equally, ask yourself if it’s appropriate on the new food pyramid that there appears to be a picture of an actual Weetabix. Having well-known branded products seems like advertising, to me.

Yes, up until December in 2016, it was still recommended that people eat more high-carb processed foods than fruit and veg daily. Does anyone honestly believe that to have been a good recommendation? If ever there was a piece of nutribabble, this is it. And yet the very experts entrusted with recommending what we should be eating now have been recommending it for decades.

My seven-year-old brought a copy of the pyramid home from school the other day, and even she knew that there are better options.

Let me be clear: as a cancer patient who has done vast amounts of research, I am a big advocate of low-carb, healthy-fat eating. But as a chef I love all food. I run a range of cafes and restaurants and some of our menus feature plenty of processed carbs, such as bread, bagels, blaas and pasta. (We also serve beer and wine, but I still don’t think alcohol should be consumed excessively.) Other menus feature plenty of kale!

However, it is how we eat at home, regularly and predominantly, that should be influenced by the best and most up-to-date nutritional advice.

There is a growing worldwide movement, including doctors, medical researchers and registered dietitians, which argues that a low-carb diet works better and is easier to stick to for most people, and that “healthy” fats are vital to good health. Indeed, many argue that the high-carb, low-fat diet recommended over the past few decades has contributed to the obesity crisis and growth of type 2 diabetes in the western world.

Some brave GPs and dieticians have bucked conventional advice and drastically reduced their prescriptions for insulin and other diabetes medications, and instead put their patients on low-carb, healthy fat diets. The impact, financially and medically, is huge.

The Irish Government is tackling obesity in various ways, one of which is changing the food pyramid. This is a good start, and hopefully other organisations will adapt the new lower processed carb pyramid when it is produced. But the new pyramid is still predominantly a high-carb, low-fat pyramid. It does not go far enough, and the reason this is so critical is that governments around the world use the food pyramid as a basis to feed millions of people, from schools to hospitals to prisons.

The disconnect is breathtaking: recommend high-carb, low-fat diets (against the latest nutritional evidence) and then watch the fallout from the inevitable results of obesity, type 2 diabetes and cancer in our overstuffed healthcare system. It is self-defeating at best and a ticking time bomb – that we can’t afford – at worst.

The Government is taking a move in the right direction. But as we’ve heard before: A lot done, but lots more to do.

Domini Kemp is a food writer and cofounder of the itsa food company.