Diarmaid Ferriter: The 1916 proclamation has many uses and misuses 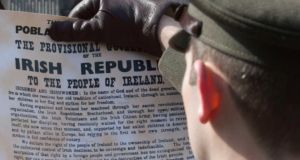 Irish schoolchildren will immerse themselves in the 1916 centenary on Proclamation Day next Tuesday and unveil their schools’ “Proclamation for a new generation” by using the original, in the words of the Department of Education and Skills guidelines, as “a foundation”. There were no such onerous duties in 1966 for the 50th anniversary; then, school managers were asked to organise the attendance of pupils at school for the unveiling of the Proclamation after which the children were excused from school for the remainder of the day. This year, however, students “must attend school for the full duration of a normal school day, regardless of the duration of the Proclamation Day programme in the school”.

I suppose that is the least they can do for Ireland 100 years on from the Rising.

Inevitably, when this initiative was first announced some cynics responded by suggesting that, rather than new proclamations being necessary, it might be better to try and implement the existing one. But perhaps there is an opportunity with this project to give more thought to the context for the original, its content and its subsequent use and misuse.

Historian John A Murphy has been critical in recent months about the insatiable appetite to wrench the Proclamation from its context of 100 years ago and latch it on to a variety of contemporary causes, including, last year, the marriage equality referendum. I think it is fair to say that Patrick Pearse and James Connolly did not have same-sex marriage on their minds as they contributed to the text of the Proclamation, so Murphy has a point.

Murphy’s argument has been countered with the contention that the Proclamation has to be a “living” document and that it no longer belongs to its authors as it was bestowed to the Republic for its citizens to make what use of it as they see fit, depending on the lights of different times.

The flourishes of both Pearse and Connolly are evident in various phrases of the Proclamation, such as “the right of the people to the ownership of Ireland”, Ireland’s “exaltation among the nations” and the guarantee of “religious and civil liberties and equal opportunities to all”. More problematic was the notion that the mandate for the Rising was derived from “the dead generations” and the bogus assertion that the right to Irish sovereignty had been asserted in arms “six times during the past 300 years”. In the words of historian Fearghal McGarry, it involved presenting “an intentionally misleading appraisal of events”. The Rising had been planned by a tiny core group and had not, as claimed, been endorsed by the Irish Volunteers (the Volunteers was not even a republican organisation); nor had the rebels struck “in full confidence of victory”.

On Monday, when President Michael D Higgins presided over the presentation of Proclamations to secondary school students at Croke Park, he asserted that the Rising “can, in many ways, be described as a stunningly ambitious act of imagination”. Some might challenge that, especially if they see it as a stunningly brutal, unmandated act of recklessness. But Higgins was reasserting what has been, quite legitimately, maintained for decades; in the words of historian FX Martin in 1967: “It was imaginatively planned with artistic vision . . . the revolt was staged consciously as a drama by its principal actors”. The Proclamation was part of the vision, drama and imagination; articulating war propaganda but also essential republican values. The article Martin wrote in 1967 was titled 1916: Myth, Fact and Mystery. Untangling that web remains a challenge to schoolchildren and their teachers during this centenary, but attempting it is a worthy endeavour.

1 Harry and Meghan will no longer be working members of British royal family
2 Chris Hadfield on the climate crisis: ‘The world has seen much, much worse’
3 Netflix: The best 101 films to watch right now
4 Mary Lou has to call for the smelling salts as SF councillor deals a knock-out blow
5 Dublin gangland figures involved in Drogheda feud that killed 17-year-old
Real news has value SUBSCRIBE