Diarmaid Ferriter: I have nothing against baptism 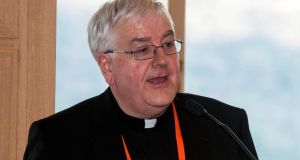 Fr Paul Connell, president of the Joint Managerial Body and the Association of Management of Catholic Secondary Schools: took issue with remarks made by Diarmuid Ferriter. Photograph: Sally MacMonagle

In Killarney last week , Fr Paul Connell, president of the Joint Managerial Body and the Association of Management of Catholic Secondary Schools, completely misconstrued remarks I made at the annual INTO congress in Wexford at Easter. In doing so he also revealed his ignorance of Irish history.

He said: “It is disheartening and indeed insulting to read articles in a national newspaper by a prominent academic associating Baptism with being a ‘stain on the national consciousness’ or encouraging dismantling protection of our Catholic ethos with the phrase ‘the snakes are coming back, you know’.”

I neither said nor wrote any such things. I referred to the 50th anniversary of the announcement by minister for education Donogh O’Malley in 1966 that he was introducing free secondary school education. During his speech, O’Malley said: “Every year, some 17,000 of our children finishing the primary school course do not receive any further education. This means that almost one in three of our future citizens are cut off at this stage from the opportunities of learning a skill and denied the cultural benefits that go with further education. This is a dark stain on the national conscience.”

The point I made was that, 50 years on, there were, in my view, continued “stains on the national conscience”, and that parents being forced to have their children baptised against their will to get them places in schools when no alternative to a Catholic school was available was one of those stains.

I have no issue whatsoever with Baptism; I was referring to what has been described as the “baptism barrier”, and expressed the view that it is completely unacceptable that some unbaptised children and their parents are being treated like second-class citizens when it comes to schooling.

Have the Snakes Come Back?DalkeySchool Project

For Fr Connell to distort the original meaning and context of that emotive and disgraceful pamphlet is bad enough. But he did worse than that; he insisted that the alternative to “growing in faith” as promoted by Catholic schooling, “is a vacuum that can express itself in nihilism and the growing phenomenon in our schools of self-harm”.

I have seldom read anything more insulting, arrogant and ignorant than that. Ironically, Fr Connell then had the gall to say: “Respect, of course, should always be afforded to the religious freedom and personal conscience of individual pupils.”

That it continues to be so is shameful. We have a Constitution that recognises parents’ right not to send their children to a school that violates their conscience, but in reality many of those parents have no choice. We have an Equal Status Act that gives schools a right to protect their ethos when it comes to their admission policies by discriminating against those who do not share that ethos. This is not, in theory, an absolute right, but in practice it far too often is.

The denominational nature of the Irish education system does not allow for equal recognition or respect for difference and this cannot be considered a true republic in relation to education while that system remains in place.

The insistence that “our Catholic ethos” in schools acts as the most effective barrier to “moral vacuum” and “despair” that can express itself in “nihilism” and “self-harm” is an obnoxious and offensive illustration of the consequences of a Catholic Church with far too much power over education. Perhaps Fr Connell should also spare a thought for those who have been driven to despair and worse by the excesses of a Catholic ethos.