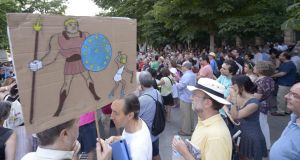 A man holds a placard depicting the story of David and Goliath at a demonstration in support of Greece, in Madrid last week – “It is sad indeed that this weekend, the Greek David in its confrontation with the Goliathesque champions of austerity is viewed with such contempt by the Irish government”. Photograph: Gerard Julien /AFP/Getty Images

Whatever about the Government’s disdain for Greece’s plight and what Syriza rightly identifies as the idiocy and unfairness of “extend and pretend” – the sticking plaster of more bailout funds and austerity when nothing is done to tackle unsustainable debt or create the space for economic growth – there was a significant Irish contribution to the original war of independence in Greece in the 19th century.

As a member of the British army, Cork man Richard Church raised a Greek regiment in the Ionian Islands in 1801 that included future Greek leaders, and pleaded the Greek case for independence at the Congress of Vienna from 1814-15.

He subsequently played a leading role in the war of independence as commander in chief of the Greek forces, later becoming a senator and member of the Council of State. When he died in 1873 in Athens he was afforded a state funeral; such was his status he was known as the “Great Liberator”.

When Irish politicians and civil servants were navigating the corridors of power in Brussels 100 years later as Ireland joined the EEC, they played a crafty game, honing their skills in the promotion of “enlightened self-interest”. This phrase found its way into a document from the Department of Foreign Affairs in February 1976: “Ireland’s commitment to European integration springs from a combination of idealism and enlightened self-interest”.

If that was ever true, what has happened more recently is that idealism and enlightenment have been jettisoned in favour of just self-interest.

More of what Irish politicians regard as “enlightened self-interest” was on display this week in reaction to the desperate crisis facing Greeks, personally and nationally. After the Government’s Economic Management Council met, where it was briefed by Central Bank governor Patrick Honohan and Cathal Kelly of the National Treasury Management Agency, one official was quoted as saying: “The meeting took note of the calm in Irish financial markets”.

Self-interest dictates that such calm is the focus rather than the storm in Greece, caused by feckless profligate radicals refusing to take the necessary medicine as obedient Ireland did.

This summer marks the 40th anniversary of Greece’s formal application to join what was then the EEC (it became a member in 1981). At that time, Dennis Kennedy, who frequently wrote on Europe for The Irish Times, commented wryly on the Irish attitude to Greece’s application: “Ireland, impeccably European as ever, is all in favour of another small nation and privately, as ever, very worried about other people seeking shares of the farm, social and regional funds.”

That was understandable; there was concern about the implications of Ireland losing its status as the poorest of the EEC members and of the emergence of a “two-tier Europe”, but although there was occasional reference in the Department of Foreign Affairs in the 1970s to the need to look at the “philosophical issues” relevant to European integration, alongside the economic, this did not take hold.

This newspaper, exactly 40 years ago, in editorialising about the Greek application, maintained: “It is certainly not up to this country to suggest that their economic development is insufficient to justify full membership. If the European Community is really concerned with a stable democratic Europe in which the living standards of the poorer regions are raised, then the Greek application is a challenge to its principles and ideals, not a threat to its comfort and cohesion”. Replace the words “Greek application” with “Greek bankruptcy” and the ongoing relevance of that 1975 editorial is apparent.

Greece, of course, was also concerned about enjoying the material benefits of EEC membership and, like Ireland, benefited handsomely precisely because it was so poor; from 1985-89 for example, it received $7.9 billion from EC funds, proportionately more than any other country. Both Ireland and Greece therefore had good reason to embrace “enlightened self-interest”.

But in more recent times, both could also have been at the forefront of attempts to resist the EU abandoning “its principles and ideals”. However, Greece now stands alone.

Much has been made over the years of the supposed “resilience” of the Irish. The Greeks, however, are more deserving of the label. Even if the relatively recent history of Greece is considered, the extent of its battering is obvious; occupation during the second World War, a civil war from 1944-49 followed by authoritarian rule, a military dictatorship from 1967 when the junta announced democracy would be “placed in a sling”, and when the professions were brutally stripped of independent thinkers, with a return to democracy in 1974.

Four decades on, a cruel EU looks on coldly at contemporary assertions of democracy and independent thought.

It is sad indeed that this weekend, the Greek David in its confrontation with the Goliathesque champions of austerity is viewed with such contempt by the Irish government.

1 Trump refuses to commit to peaceful transfer of power if he loses election
2 Swedish expert backtracks on herd immunity for Ireland
3 Five lessons I learned preparing my house for sale
4 Shelbourne Hotel statues to be restored to their plinths
5 Miriam Lord: Micheál has Mary Lou pegged as a street angel and House devil
Real news has value SUBSCRIBE