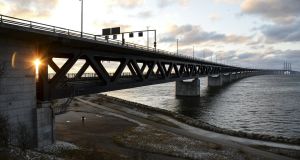 The sun sets over the Oresund Bridge between Sweden and Denmark, in Malmo, Sweden.

Zipping across the Øresund bridge by train on Monday morning I found myself wondering how much Ireland had contributed to the border stand-off here.

The view from the train was spectacular – hard winter sunlight glittering on the icy Nordic sea, offshore windmills glinting on the horizon – but the mood in the carriage was grim.

The Øresund bridge, connecting Copenhagen and Sweden, opened in 2000 as an eight kilometre steel-and-concrete celebration of European integration. It may yet become a spectacular monument to its disintegration.

In the train carriage, passengers watched meekly as a border guard worked his way through the carriage to check passenger IDs.

The train was headed for Malmö in Sweden – the initiator of these new border checks – and this was the second ID check since the first, 10 minutes previously, on the platform in Copenhagen airport station.

Of course this wasn’t some cold war drama: the guard was friendly, and there were no angry Alsatians waiting on the platform. But the awful tension was something I never expected to experience again in Europe.

It was hard not to feel a pang of nostalgia for an era that may be ending before our eyes.

Sweden introduced the checks on Monday in a bid to keep out undocumented foreigners because Stockholm says it cannot accept another 160,000 asylum seekers, as it did last year, while its neighbours refuse to share the burden.

But reimposing ID checks between Sweden and Denmark is a massive blow here.

It ends half a century of free travel in the so-called Nordic Passport union – a front-runner to the later Schengen zone that offers EU citizens free travel through much of the continent.

During my return journey on Monday from Malmö to Copenhagen, the next domino wobbled: Denmark had announced spot checks on its border to Germany.

Because no EU country wants to become a refugee cul-de-sac, one national drawbridge after another is being pulled up.

It’s important not to overdramatise the situation: traffic is still flowing on the Øresund bridge, but not as it should.

The bridge allowed Copenhagen, Malmö and their surrounding regions to blossom into a prosperous whole that ignored national borders.

Politicians encouraged people to work in prosperous Copenhagen and live in more affordable Malmö, with the bridge as a promise that commuters could have the best of both worlds.

Now the refugee crisis has driven a wedge between Denmark and Sweden, and their politicians have revoked their promise. On the surface, it appears that national governments are acting because of an EU failure, but the opposite is the case.

This latest drama in the EU’s refugee crisis is a failure of national governments meeting in Brussels to do what the EU was set up to do – and what their voters have elected them to do: to solve together problems that cannot be solved alone.

We can do better

Even if that figure rises through family reunions, it’s a negligible contribution to a staggering problem.

Denmark, a country of a similar-sized population to Ireland, is often painted as a refugee hardliner yet it still accepted up to five times the number committed to by Ireland-of-the-welcomes. Ireland’s two-year offer falls short of the 5,000 people still arriving over the border in Bavaria each day.

The more he talks up the Irish economic recovery, the more Seehofer will wonder why Ireland is not doing more heavy lifting in the refugee crisis.

Politics, history and geography have made Greece, Italy, Germany and the Nordics the main focus of the refugee crisis.

But does this absolve us of our obligation to offer real assistance?

Ireland still feels far away from the refugee crisis but it may become real – and soon.

If the handful of EU countries left alone with most of the asylum seekers eventually close their doors, under domestic pressure, those people will show up on our doorstep.

In this post-crisis era, as people struggle to get their day-to-day lives back on track, it’s understandable that interest in the wider world and in Europe is diminished.

Europe’s refugee crisis response cannot be about keeping flood waters out, but about diverting a population flow sensibly so no one is swamped.

And while Ireland is quick to praise post-dated promises it has made in the refugee crisis, why should Sweden, Denmark or Germany be impressed with an annual refugee commitment from Ireland that would take 41 years to fill Croke Park?

1 All students will not return to school even if social distancing rules are relaxed – McHugh
2 We need to pay very close attention to what is happening in Britain now
3 What exactly will happen in phase two of easing restrictions?
4 Trump says, ‘I have the best words.’ Now this comedian’s going viral for lip-syncing them
5 What do you do when you meet a bear on a walk? Copy this 12-year-old
Real news has value SUBSCRIBE