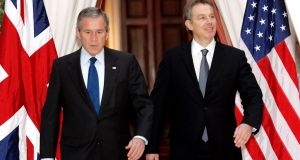 US president George W Bush and British prime minister Tony Blair walk together from their meeting at the US embassy in Brussels, Belgium. File photograph: Kevin Lamarque/Reuters

The calamitous consequences of the 2003 invasion of Iraq are difficult to overstate, for that country and its neighbours and for the security of the western world as well as the Middle East. Tens of thousands of Iraqis and thousands of American and British military personnel died in the conflict, and more than a million people were displaced from their homes.

There is a direct causal link between that war and the rise of so-called Islamic State, which recruited from the remnants of Saddam Hussein’s army and was nourished by the grievances of the Sunni population. Many of the terrorist attacks which have killed civilians in Europe and the United States in recent years were carried out by young Muslims radicalised by the Iraq war and its aftermath.

The invasion, and the untrue claims about weapons of mass destruction (WMD) used to justify it, have also undermined confidence in political leadership in the West. And Sir John Chilcot’s report on Britain’s role in the war documents in devastating detail that the political and governmental structures which planned the invasion were undeserving of public confidence.

Chilcot shows beyond doubt that, although Tony Blair initially opposed George W Bush’s plan for regime change in Iraq, he soon fell into line, working with the US president to soften up public opinion in advance of military action. Blair and Bush were already discussing toppling Saddam weeks after the 9/11 attacks in 2001, and before the end of that year Blair told the US president a successful operation in Afghanistan could help build the case for military action in Iraq.

Blair outlined to Bush what he described as a “clever strategy” to build the case for regime change, by addressing the Israeli-Palestinian conflict, seeking United Nations approval and shifting public opinion in Europe and the Arab world. But as he made clear in another memo on July 28th, 2002, Blair’s support for Bush was unconditional: “I will be with you, whatever. But this is the moment to assess bluntly the difficulties. The planning on this and the strategy are the toughest yet. This is not Kosovo. This is not Afghanistan. It is not even the Gulf War. The military part of this is hazardous but I will concentrate mainly on the political context for success.”

Blair failed to influence Bush’s policy in any significant way, either on the planning of the war or its conduct. Chilcot acknowledges the importance of Britain’s relationship with the US and the likelihood that defying Bush over Iraq would have created strains between London and Washington. But he says it is questionable if refusing to join in the invasion of Iraq would have destroyed the relationship.

“Over the past seven decades, the UK and US have adopted differing, and sometimes conflicting, positions on major issues, for example Suez, the Vietnam War, the Falklands, Grenada, Bosnia, the Arab/Israel dispute and, at times, Northern Ireland. Those differences did not fundamentally call into question the practice of close co-operation, to mutual advantage, on the overall relationship, including defence and intelligence.”

Blair’s mistakes were crucial but he was not alone in failing to properly evaluate intelligence in advance of the invasion or to plan properly for the military deployment and its aftermath. Chilcot exposes a paralysing groupthink within Britain’s intelligence services, which did not permit any consideration of the possibility (which turned out to be true) that Saddam did not possess WMD.

The intelligence chiefs were so eager to support their political masters so that, if Blair did not sex up the notorious “dodgy dossier” about Iraq’s alleged WMD in September 2002, it was partly because he had no need to. Although the foreword to the dossier presented the intelligence estimate with a certainty that was not justified, the Joint Intelligence Committee had failed to make clear to Blair that the intelligence had not established beyond doubt that Iraq had continued to produce chemical and biological weapons or was trying to develop nuclear weapons.

Many of the mistakes made in the run- up to the Iraq war might have been avoided if Blair had used the formal decision-making machinery of government. Instead of involving the cabinet or cabinet subcommittees, however, he favoured an informal style of “sofa government” with a handful of advisers making key decisions. Parliament was all but excluded and the vote to authorise action was held so close to the planned deployment that many MPs who voted in favour of it did so because they feared they would otherwise be undermining the service personnel on the eve of action.

David Cameron told MPs yesterday that he had overhauled the decision-making process in Downing Street since taking office, establishing a national security council with military and intelligence chiefs as well as cabinet ministers. And he said he encouraged a culture within government which encouraged open dissent and questioning.

Such improvements are welcome but, as the 2011 intervention in Libya showed, they have not been sufficient to prevent further ill-advised and poorly thought out military adventures. Even the best governmental structures cannot eliminate error and military operations seldom proceed according to plan but the next time a British prime minister goes to war it should be after the most rigorous scru- tiny and with the informed approval of the people’s representatives in parliament.