Denis Staunton: May and Brexit’s future now in doubt 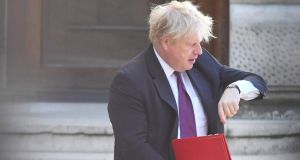 Britain’s former foreign secretary Boris Johnson: his many critics will question his motives in stepping down, pointing to his long history of political opportunism and self-interest. Photograph: Toby Melville

Three days after Theresa May appeared to stamp her authority on her cabinet, two of her most senior ministers have resigned, destabilising British politics and putting the future of the prime minister, the government and Brexit itself in doubt. David Davis and Boris Johnson resigned in protest against May’s embrace of a soft Brexit but the split among Conservative Brexiteers has made both a “no deal” Brexit and no Brexit at all more likely.

In his letter of resignation, Davis complained that the plan agreed by the cabinet at Chequers last Friday “hands control of large swathes of our economy to the EU and is certainly not returning control of our laws in any real sense”.

Davis has been unhappy for months, as May’s civil service sherpa Olly Robbins took ever greater control of the negotiations with Brussels. The extent to which Davis had been sidelined became apparent last month when it emerged that he had spent just four hours negotiating with EU chief negotiator Michel Barnier since the start of this year.

By replacing Davis with Dominic Raab, a committed Brexiteer, May sought to limit the rebellion against the Brexit plan she agreed with the cabinet at Chequers. But Downing Street made clear that Raab will not enjoy any greater authority over the negotiations than Davis did, pointing out that the prime minister has been Britain’s official chief negotiator from the beginning.

Steve Baker, the junior minister who resigned with Davis, is a former leader of the hardline Brexiteer European Research Group (ERG) of Conservative backbenchers. Another junior Brexit minister, Suella Braverman, who was widely expected to follow suit, has instead remained in her post.

The impact of Davis’s resignation was always going to depend on whether other cabinet ministers followed suit and Brexiteer ministers Michael Gove, Liam Fox, Andrea Leadsom and Chris Grayling had already spoken up in public over the weekend to back the prime minister’s plan. Boris Johnson, who was reported to have described the proposal as “a turd” before backing it, allowed his friends to brief over the weekend that his resignation would only benefit Michel Barnier and Angela Merkel and that he could best protect Brexit by staying on and fighting from within the cabinet.

In his resignation letter, Johnson told May that, although he had congratulated her at the end of the Chequers meeting, saying that the government now had “a song to sing”, he discovered over the weekend that the song stuck in his throat.

Johnson’s many critics on the Conservative backbenchers will question his motives, pointing to his long history of political opportunism and self-interest. Despite his poor performance at the foreign office, he remains a charismatic figure who can thrill the Conservative grassroots with his rhetoric and ebullient personal style.

Davis was almost certainly right when he said in his resignation letter that the Chequers proposal would lead to a demand from Brussels for more concessions. When the British White Paper is published on Thursday, Barnier will consider it carefully before delivering a response which is likely to restate the EU’s resistance to “cherry-picking” the single market or unravelling its four freedoms.

It is not only the commission but the member states that are wary of unravelling the single market or offering May a deal that could give Britain a competitive advantage after Brexit.

Backbench Brexiteers were outraged on Monday morning when they heard that Downing Street was planning to brief opposition MPs about the Chequers proposal. But if hardline Brexiteers will not back May’s plan, she will have to look across the floor to find a majority for a soft Brexit.

The Chequers proposal has divided Conservative Brexiteers into pragmatists including Gove, Leadsom and Grayling, who have agreed reluctantly to back the prime minister’s plan, and hardliners such as Rees-Mogg who have vowed to vote against any such Brexit deal. Since last year’s general election, there has been no majority in the House of Commons for a hard Brexit that would damage British business by creating barriers to trade with the EU.

But there may be no majority for any other kind of Brexit either, as Labour has set out six tests for a deal that will be impossible to fulfil. Jeremy Corbyn is likely to whip his MPs to vote against any deal May proposes and a compromise based on the Chequers plan could be voted down by a combination of opposition MPs and hardline Conservative Brexiteers.

If parliament rejects her deal, May’s government could fall, leading to a possible extension of Article 50 negotiations. And if she attempts to leave the EU without a deal, parliament could vote to send her back to the negotiating table or simply trigger a general election.

If parliament rejects her deal, May’s government could fall, leading to a possible extension of Article 50 negotiations

The Conservatives and Labour are close to level in the polls but the Tories are defending more marginal seats than the opposition. It is impossible to predict the outcome of a general election, but Labour would need to make dramatic gains to win an overall majority.

A more likely scenario might see Corbyn elected prime minister with the support of other opposition parties such as the Scottish Nationalists and the Liberal Democrats. Such an arrangement would oblige Corbyn to seek an extension of the Article 50 negotiations and would open up the possibility of delaying or softening Brexit further. Or even of abandoning it altogether.

1 Aaron Brady, the man who said with pride he was a cop killer
2 Staycationing just means paying too much to sleep in someone else’s uncomfortable bed
3 Aaron Brady found guilty of capital murder of Det Garda Adrian Donohoe
4 Coronavirus: 40 new cases and one more death confirmed by Nphet
5 Case of Covid-19 confirmed at community crèche on UCD campus
Real news has value SUBSCRIBE