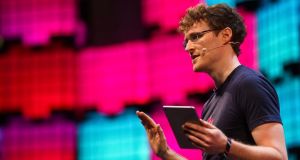 In Lisbon, Web Summit founder Paddy Cosgrave “paced the stage like a man who had lost his keys, clutching a tiny iPad as a life raft”. Photograph: Andre Kosters/EPA

Paddy Cosgrave stood nervously on the stage in front of 15,000 people, head down and muttering: “Uh oh, is the wifi working?” It was not. The 2016 Web Summit was just three minutes old. Irish journalists were tweeting with glee about the mishap even while Cosgrave was still presenting.

Wifi trouble was one of the reasons Cosgrave and his crew gave when announcing their unpopular decision to leave Dublin for Lisbon. They foolishly took on Government spin doctors and lost spectacularly. Their error was first using the prestige of the Taoiseach and later dumping on him and his office.

Cosgrave had good points to make about the Government exploiting the tech event’s success but doing little to help. The manner in which he made his argument, however, with a ranting statement and tetchy follow-ups, suffocated it.

The Irish public reacted with scorn and cynicism. Web Summit is now one of the most maltreated of our local triumphs. It started in 2010 with 400 attendees. This week’s event attracted 80,000 people, paying hundreds of euro or more per ticket. The attendance is double last year’s in Dublin.

The speakers are Hollywood and football superstars, tech billionaires and political leaders. Deals worth tens of millions are made on its fringes and tickets are already on sale for next year’s event. A stunning achievement, it’s as big a global Irish brand as any whiskey or cheese-and-onion crisp, yet it’s as disliked as a Bono.

After the wifi gaffe, tweeters reacted with “Karma is a bitch”, “It’s the wifi curse” and “Should’ve stayed in Dublin”. The media is also in the anti camp, with headlines screaming about how a momentary glitch “marred” the opening. The criticism is unfair and excessive. However, the Web Summit’s founder, like Rory McIlroy, doesn’t make it easy for us to love him.

Part of its presentation problem is how Cosgrave insists on being the MC. He is a driven businessman but he has no talent for the stage. His opening remarks on Tuesday night were dull, self-indulgent and lacking energy. He paced the stage like a man who had lost his keys, clutching a tiny iPad as a life raft. The huge tech crowd was unconvinced and stayed subdued until the confetti cannon fired. Cosgrave was like Frank Spencer drowning in a sea of Steve Jobs.

Reading from the tablet, his head constantly bowed, giving him the body language of unease. It’s a tech conference: get a teleprompter. The iPad may have failed too, because Cosgrave didn’t seem to have a speech ready or anything inspiring to say. Instead he repeated exclamations about how “unbelievable” and “incredible” everything was, in a lifeless tone that made it clear the opposite was the reality. He needed humour to defuse the awkward wifi moment but he didn’t have it.

Earning tens of millions of euro in ticket sales, they could’ve got a Ryan Seacrest or any effervescent numbskull who could whip up a crowd. American actor and filmmaker Joseph Gordon-Levitt was the first guest; how hard could it be to stoke up fervour with global celebrities waiting in the wings?

And why take the risk of testing the wifi anyway, in front of a huge crowd on opening night, on a big screen, live online within minutes of the start? The PR around Web Summit is on constant defence mode, firing back at bad headlines that the wifi issue was a “glitch”.

There are plenty of things to spin positively about it. That Cosgrave and his crew have created a global all-year-round events company. That it hasn’t sold out like too many start-ups the minute a corporate giant comes calling. That it has created employment for 140 people and is expanding by 100 more. That it creates a mini-economic boom in its host city. That a small group of founders managed to make all this happen from a student flat in Ranelagh six years ago.

A lot of the backlash against Cosgrave involves his sense of self. One radio presenter said on air last year: “He has an ego the size of Wyoming. ” It’s a horrid Irish thing to suggest ego is the worst condition possible. I challenge any person to set up a multimillion-euro phenomenon that sells as many tickets as Beyoncé in Croke Park and then try act as humble as a monk.

Web Summit has divorced Ireland and the love is gone. It shouldn’t mean though that we can’t still be friends. “Dear Paddy, Pint soon? Yours, Ireland.”

1 Election 2020: FF edges ahead of FG as SF surges in new Ipsos MRBI poll
2 Who are Ireland’s 17 billionaires?
3 Gardaí suspect botched murder attempt was bid to avenge Mulready-Woods death
4 Rob Delaney: ‘As my career took off, my son got sick ... And then he died’
5 Fintan O'Toole: Safety-first politics has had its day
Real news has value SUBSCRIBE