David Begg: Why Ireland needs to think about a Plan B for Brexit 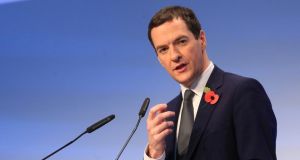 UK chancellor George Osborne has been on a recent charm offensive in Germany. Photograph: Krisztian Bocsi/Bloomberg

The publication of a report by the Economic and Social Research Institute suggesting that one-fifth of Anglo-Irish trade could be at risk in the event of a “Brexit” presents a major challenge for public policy. Apart from hoping it won’t happen, we need to start thinking about an alternative strategy in case it does.

The Department of Finance says it does not necessarily agree with all the findings of the ESRI concerning the implications of a British withdrawal from the European Union. Nevertheless, there is widespread acceptance that the economic challenges would be very significant.

This indeed was the consensus of a seminar on Brexit organised by the Charter Group in Dublin a couple of weeks ago. There is justifiable concern that we could sleepwalk into a major crisis and, in that respect, publication of the ESRI report is timely.

The ESRI is presenting a worst-case evaluation, but even if there are differences of degree, there is considerable evidence from other sources to back up its conclusions. Open Europe, a think tank, has suggested the economic impact on Ireland of Britain leaving could be a permanent loss of 1.1 per cent of gross domestic product by 2030 in the best case and 3.1 per cent in the worst case.

Likewise, the Bertelsmann Foundation calculates possible losses of 0.82 per cent and 2.66 per cent of GDP in the best and worst cases respectively. Britain is a particularly important market for indigenous Irish companies. In 2012, 43 per cent of exports from Irish companies went to the UK, while the corresponding figure for foreign companies exporting from Ireland was only 12 per cent.

But at heart this is much more a political than an economic question. Britain has often been described as Ireland’s closest ally in Europe. This is a paradox of the independence project we are to celebrate next year. All our key policy decisions about European integration have been predicated on Britain being alongside us.

This was true when we joined the EEC in 1974 and it was true when we decided to join the single currency in 1999. Of course, Britain did not join but the belief was that it would eventually. There were good grounds for this assumption. According to Alastair Campbell’s Diaries, Tony Blair was very much in favour and, in February 1999, was set to make a statement to this effect in what was put out to the media as “a change of gear”.

currency union Interestingly, this is exactly the phrase used to describe

chancellor George Osborne’s recent charm offensive in Germany. He is looking for the EU treaty to be rewritten to make it clear that the EU will be a “multicurrency union” in which some countries, including Britain, may never join the inner euro zone core, which could forge ahead with closer integration.

The devil, of course, is in the detail but, on the face of it, Britain’s position looks like the de facto situation anyway. It is hard to see it satisfying his Tory Party colleagues.

Although it didn’t seem to feature in Germany, Britain wants to limit immigration and to repatriate some regulatory powers from Brussels. It also wants greater powers to block EU legislation.

The reality is that there is a deep schism in the Tory Party wherein its libertarian wing, with the aid of a partisan press, wants to drive home an ultimate Thatcherite agenda. Their vision is of a Britain outside the EU, with a shrunken state providing a low-tax, free-market paradise for the world’s rich and multinationals. They will not be easy to appease.

But George Osborne has a lot of skin in this game. He wants to succeed David Cameron as prime minister, which pits him against a populist and opportunistic Eurosceptic challenger in Boris Johnson. He is unlikely to get much help from the new Labour leader, Jeremy Corbyn, in selling any package he may manage to negotiate.

Of course the Government must do what it can to influence public opinion in Britain given the possible consequences spelt out by the ESRI. Much is made of the 400,000 diaspora living in Britain, but many of them may now consider that country their home and vote according to what they think is right for it. Engaging with elite organisations such as the Confederation of British Industry, which is anyway in favour of Britain remaining in the EU, may not have much practical effect either. Nevertheless, my intuition is that the Cameron-Osborne faction will carry the referendum. In early opinion polls after Harold Wilson’s 1974-1975 renegotiation, a majority was in favour of withdrawing from the EEC. Despite the changes he secured being widely derided as “cosmetic”, he won the 1975 referendum convincingly.

But it is likely to be a narrow victory this time, and the centrifugal force of Euroscepticism and deepening euro zone integration will mean an eventual divorce of Britain from Europe is probable. Any respite we might gain from a positive outcome will not last. The problem will manifest itself again in the medium term.

So Ireland needs a Plan B. This is likely to require a change of approach to industrial policy and a realisation that our international relations have to take account of our membership of a more deeply integrated euro zone dominated by Germany and in which Britain will no longer be our ally.

If we can transcend the immediate economic challenges of Brexit, whenever it happens, the longer-term consequences may not necessarily be all that bad. We may discover certain advantages to making common cause with some of the small, open economies of Europe and adopting their social and economic models. We have to face up to that possibility now though, and start preparing to engage with it. In a way it could be the ultimate denouement of the independence project.

David Begg is director of Tasc, the independently funded think tank for action on social change

1 Dancing with the Stars has hit Father Ted levels of farce
2 Storm Dennis washes abandoned ‘ghost ship’ onto rocks off Co Cork
3 Forget a grand coalition – here is what the next government will most likely look like
4 Fine Gael faces internal resistance to a grand coalition with FF and Greens
5 Caroline Flack death: Public disquiet over media conduct grows
Real news has value SUBSCRIBE