Crusade of bishops against amendment may mislead voters 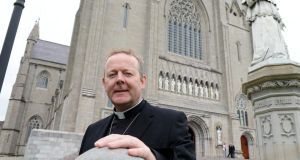 ‘In January the Catholic publication The Tablet quoted Archbishop Eamon Martin of Armagh (above) as calling for a referendum debate “free from insult or injury or hurt to any person whether they be people of a homosexual nature or people of faith.” I found the assumption at the heart of this statement both telling and troubling. What about homosexual people of faith?’ Photograph: Eric Luke / The Irish Times

One of the most striking features of the marriage equality referendum campaign has been the energy and resources devoted by the Catholic hierarchy to opposing the amendment.

As a gay Catholic I rather naively hoped that the church would take the view that the referendum concerned the civil rights of the LGBT community and in no way impinged upon religious marriage. How wrong I was. With echoes of the now distant referendums on civil divorce, bishops’ pastorals have been read at Masses throughout the country and many churches are well-stocked with glossy anti-amendment literature.

My generation, children of the 1980s and 1990s, have grown up against a backdrop of stomach-churning revelations about how far the church drifted from the message of Jesus. For those of us who stuck with the institution, there was a sense of a more humble church, cowed by scandal. I have never encountered a sermon about sexual morality, nor heard anyone being “read from the altar”. The current crusade of the bishops, which has filtered down to parishes throughout the State, is redolent of the dictatorial, judgmental church of old. It transpires that the obsession with matters of human sexuality and the desire to dominate secular life were hidden, not eliminated.

There is a danger that the interventions of the bishops will cause some voters to think that marriage within the Catholic Church will be affected if the amendment is passed. This is not the case. The amendment concerns civil or State marriage only and will have no impact on the rules of organised religions in respect of the marriages they conduct. In other words, a Yes vote in the referendum will enable same-sex couples to contract a State marriage in a registry office or other approved place, but not in a Catholic church, or any other church.

A number of themes are evident in the pronouncements of the bishops on the referendum proposal. The argument that every child has a right to a mother and a father is a recurring one, present in the bishops’ joint statement The Meaning of Marriage and a number of pastoral letters released by individual Bishops. It has also been a central contention of the No side generally throughout the campaign. A related theme of the bishops is the complementarity of the sexes. These non-empirical claims imply a number of things which would be socially unacceptable if they were said directly. They insinuate that the single parent who raises a child is failing to meet the child’s needs and entitlements, that there is something suspect about gay men who want to have children and that outdated conceptions of gender roles should be perpetuated. If there is a right to a mother and a father, should there not be some remedial mechanism whereby a replacement parent of the appropriate sex can be inserted, presumably by force, into the single parent family to vindicate the right of the child?

In their respective pastoral letters, Bishop John Buckley of Cork and Ross and Bishop Denis Brennan of Ferns state that it is a core feature of marriage that it has the potential to create new life. This is patently false, as the Catholic Church itself marries people who are beyond the age of child bearing or who are biologically unable to do so.

The potential effect of the amendment on the teaching of marriage in Catholic schools is raised in the pastoral letters of Bishop Leo O’Reilly of Kilmore and Bishop Brendan Leahy of Limerick. The amendment will have no effect in this area, as the entitlement of religions to educate in accordance with their ethos is safeguarded by Articles 42 and 44 of the Constitution. I do not recall religious schools being forced to teach about the advantages of artificial contraception or divorce after their legalisation by the State.

In January the Catholic publication The Tablet quoted Archbishop Eamon Martin of Armagh as calling for a referendum debate “free from insult or injury or hurt to any person whether they be people of a homosexual nature or people of faith.”

As a number of courageous priests have stated publicly, that is what this referendum is about. And that is why the interventions of the Catholic hierarchy are misplaced and inappropriate, as they were in the divorce referendums.

Mark Coen is a lecturer in Law at the Sutherland School of Law at University College Dublin.

5 Oprah with Meghan and Harry: One by one the bombshells drop