Criticism of Easter Rising commemoration way off the mark 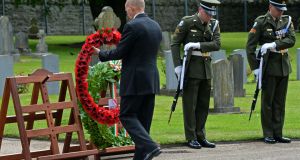 This year’s State commemoration of the Easter Rising has been criticised for not achieving the stated goal of inclusivity. But its critics, including Dennis Kennedy writing in this paper earlier in the week, lose sight of the fact that it was not a once-off event.

The commemoration of the Rising was set in the context of a Decade of Centenaries 1912-1923, remembering a wide variety of events during the most formative period in recent Irish history.

The decade began by remembering the introduction of the Third Home Rule Bill and the resistance to it represented by the Ulster Covenant. In 2016, central points on both the road to independence and in the Great War – the Easter Rising and the Battle of the Somme – were both commemorated in full State ceremonies.

Representatives of the State have participated in many events north of the Border to which they have been invited, including commemoration of the outbreak of the Great War at the Belfast Cenotaph and St Anne’s Cathedral on August 4th, 2014, and, earlier this year, the Battle of Jutland. The organisers of these events in Northern Ireland strove to be inclusive, acknowledging their all-Ireland significance.

Similarly, the State is conscious that many events of the decade here are part of a shared history or of another tradition that deserves understanding and respect. The Abbey Theatre, a national cultural institution, put on a new production of Frank McGuinness’s Observe the Sons of Ulster Marching Towards the Somme. The State commemorated in Grangegorman those who died serving with British forces, some Irish, during the Rising, and the names of all who died are inscribed on a wall in Glasnevin Cemetery.

It is a little ironic when the Rising – a product of nationalists’ eventual disillusionment with Home Rule after persevering with it for 45 years – is criticised from a unionist perspective, given that the whole object of unionism was to frustrate it. Home Rule could have been an historic compromise between unionism and nationalism. As late as 1922, Éamon de Valera claimed rhetorically that he would willingly revert to the modest scheme for devolution known as the Council Bill of 1907, if unionists would support it.

The more one reads about the constitutional alternative, the more it resembles a mirage. By summer 1914, there was a complete impasse. As Ronan Fanning has written, “the Great War then enabled [former British prime minister HH] Asquith to do what he had always wanted to do about Ireland: nothing”.

Even when action became urgent after the Rising, not least for the prosecution of the war, it proved impossible to implement Home Rule on a 26-county or 32-county basis because one or other set of unionists was opposed. As Garret FitzGerald pointed out in this newspaper, the notion, unsupported by evidence, that Britain would have peacefully conceded independence to this part of Ireland before the late 20th century, is “alternative history gone mad”.

Before the Rising, Connolly and Pearse instructed that there was not a shot to be fired in Ulster. There were no inter-communal clashes in 1916. Partition was already virtually accomplished.

An even-handed concern for constitutionalism would be wonderful. The British seldom respected Irish electoral mandates. Militarisation of the situation, armed volunteers and gun-running, the flirtation with imperial Germany, the declaration of a provisional government, none of them began with nationalists.

Maxwell’s repression helped the Rising achieve a transformative effect. An overwhelming mandate for democratic independence won in 1918 made not a blind bit of difference, and soon the Dáil and Sinn Féin were suppressed.

Like the ghost of Hamlet’s father, the Rising awakened in nationalist Ireland its “almost blunted purpose”, so that seven years later, after further struggle, the Irish Free State was welcomed, as it took its place alongside other new European states in the League of Nations.

One hundred years on, a small country is surely entitled to take some pride in that achievement. Without the Rising, there would perhaps be no independent Irish State, and no alternative post-Brexit option for the people of Northern Ireland to wonder about. Dr Martin Mansergh was a TD for Tipperary South from 2007 to 2011 and vice-chair of the expert advisory group on commemorations

1 Susie Dent: ‘Jimmy Carr is incredibly rude to me. I took it as a compliment’
2 Man with electric scooter who died in Meath was due to get married in the coming weeks
3 My friends keep mocking my new boyfriend’s small penis
4 Hospitality industry suffers another blow as New Year’s Eve festival is cancelled
5 Tour de France: Every yellow jersey winner must feel guilty by some association
Real news has value SUBSCRIBE