Court redress is becoming the preserve of the wealthy 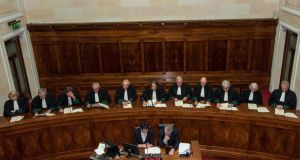 File picture of the Supreme Court. The court, by a majority ruling of four to one, has decided that champerty, or litigation financing, is not legal in this jurisdiction. Photograph: Collins Courts

The Supreme Court has invited the Oireachtas to consider the citizen’s constitutional right of access to the courts in the context of the Persona case, where the losers of the 1995 mobile phone licence competition want to sue the State.

Persona was the second-ranked bidder in the competition, which was won by Denis O’Brien’s Esat Digifone. The Moriarty tribunal, which investigated the competition, found that the then communications minister, Michael Lowry, interfered in the licence process, and that there were financial links between Lowry and O’Brien. Lowry and O’Brien have rejected the tribunal’s findings.

Persona has said that prosecuting its case will cost it about €10 million in legal fees. The company is owned by two Irish businessmen, Tony Boyle and Michael McGinley, and cost is proving a difficulty.

To address this, they entered into an arrangement with Cayman Islands-based Harbour Fund III LLP, whereby it would share any proceeds from the case in return for the fund paying for the legal costs of taking it. They then asked the courts if the arrangement was legal.

The Supreme Court, by a majority ruling of four to one, has decided that champerty, or litigation financing, is not legal in this jurisdiction. The law against it goes back centuries but remains on the statute books. Persona did not challenge the constitutionality of the law.

However, the judges expressed concern that the State is a beneficiary of the ruling that the case cannot proceed, in a situation where there is a public interest in seeing the courts adjudicate on what is one of the most serious allegations made against the State since its foundation.

Mr Justice Liam McKechnie deferred his ruling to allow the State give consideration to the issues raised by the case. He described the inability of the case to go ahead because of the funding issue as “highly disturbing and terribly disquieting”. The other four judges in the case found that litigation funding was illegal, but Mr Justice McKechnie was not the only one to express feelings of disquiet.

In his ruling, Mr Justice Frank Clarke broadened the issue to a general one. Accepting that third-party funding could create risks such as the commoditisation of litigation, he noted how certain types of litigation have grown vastly more complex in recent times, and outlined the consequences of this for people’s right of access to the courts.

The State often funds defendants in criminal law but in most civil cases it is the parties before the courts who have responsibility for the costs of the proceedings.

There is also the possibility that a litigant can represent him or herself. However, Mr Justice Clarke said that with the growing complexity of some types of litigation, it was the experience of judges that many cases could not be run in any real sense without the assistance of lawyers.

No foal, no fee

A consequence of all this is that the constitutional right of access to the courts is, in practice, frustrated.

While Mr Justice Clarke said some study might be needed to identify the extent of the problem, it was “worth recording that the experience of the courts suggests that there may well be a problem, that it may well be significant, and that there are at least arguable grounds for suggesting that it is growing”.

In civil law jurisdictions more of the work in particular cases is done by the courts, as against by the parties before the court. This has the effect of shifting the cost of a hearing towards the public purse, and away from the pockets of the party that eventually loses.

“It is striking that each of the more than 80 judges on the Slovakian supreme court have two researchers, whereas the nine judges who serve on the Irish Supreme Court are forced to share a researcher between each two.”

The advantage of the system in common-law jurisdictions such as Ireland is that “the taxpayer saves a great deal of money”. But this is at the cost of the litigants, and has consequences for the issue of access to justice.

Mr Justice Clarke noted that, adjusting for the relative populations of the two countries, if Ireland had the same number of judges, per capita, as Germany, it would have 1,250, and not the total of fewer than 170 it has at present.

Shifting to a courts regime more akin to those that exist in civil-law jurisdictions would, the judge said, shift the resources burden from plaintiffs but at a very significant cost to the public purse. “There is, therefore, no pain-free solution to the problem.”

He said courts should find a remedy where it has found there is a breach of constitutional rights. (No such finding has been made in relation to champerty.)

While selecting options for removing a breach of constitutional rights is fundamentally a matter for the Oireachtas, or the executive, circumstances could arise where, after no action had been taken to address a definitive finding that a constitutional right was being breached, the courts, as guardians of the constitution, might have “no option” but to take measures that would not otherwise be justified.

“There are strong grounds for believing that there cannot [in such circumstances] just be no answer.”

What all of that means for the issue of third-party funding is not clear.

Mr Justice Clarke said he very much agreed with the Chief Justice, Ms Justice Susan Denham, who said the complex policy issues involved would be suited to legislation drafted in the light of a study by the Law Reform Commission.

Meanwhile, Boyle and McGinley are examining their options.