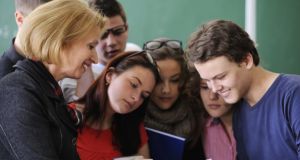 “Women are clearly committed to the institutions that they serve. Yet they do not feel that they exert influence at departmental, faculty or in the wider institutional context.” Photograph: Getty Images

The recent news that Waterford-born academic Prof Louise Richardson is set to become the first woman to lead the University of Oxford came on the same day that the Higher Education Authority announced a review of gender equality policies in Irish universities to promote more women in leadership roles.

More than two-thirds (69 per cent) of senior academics in the study were male and less than one-third (31 per cent) female. Nine per cent of academics at professor level were male and 2 per cent were female. Women are far more likely to hold part-time and fixed-term appointments. A higher proportion of males (76 per cent) had permanent tenured contracts compared with their female colleagues (66 per cent).

Professional networks are very important for academics in terms of promotion, securing research funding opportunities and career development. These networks tend to be highly gendered, with women experiencing greater difficulty than their male colleagues in establishing and maintaining high-level network ties.

A higher proportion of male academics served as members of national or international scientific committees, boards or bodies; (55 per cent vs 44 per cent) engaged in peer reviewing, (76 per cent vs 59 per cent) and acted as editors of a journal or book series (28 per cent vs 17 per cent). This type of involvement allows academics to tap into wider international and national research funding opportunities.

In light of this data a number of issues must be addressed by higher education institutions. These include the issue of employment contracts and a recognition of teaching as an important element of career progression. Female academics in line with their male colleagues should have the same opportunities to work with doctoral students. This can be facilitated at department level.

Having access to national and international networks is a very important part of the academic career. This requires time to attend conferences and network meetings. There is a clear need at institutional level to develop structures that will support female academics becoming engaged in these activities. This in turn will provide opportunities to facilitate publications with national and international colleagues.

Institutions need to explore with female academics why they find it difficult to become principal investigators on research projects. Impediments that exist in relation to such a time-consuming activity for all academics should be addressed, particularly with reference to the onerous administrative and bureaucratic requirements.

Academics are influenced by their organisational settings, and the professional and social networks that emerge in this context. If we really want to address gender imbalance in higher education, this study suggests that root and branch measures are required.

We need to look at the deep culture of universities and the division of labour within departments. We must not, in a passive way, allow gendered patterns to be reproduced as they so frequently are in domestic and other settings.

Dr Marie Clarke is a senior lecturer and former head of the School of Education in University College Dublin. She has been a member of UCD Governing Authority since 2009.

4 Gwyneth Paltrow: ‘I’ve never been asked that question before. You’ve made me blush’