Commemorating 1916: There is a risk it will degenerate into a self-indulgent exercise in whatiffery 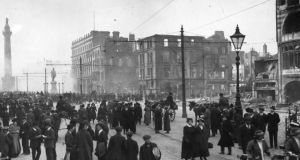 ‘As the centenary of 1916 approaches, the most apposite aspect of Garret FitzGerald’s reflections on Irish independence relate to sovereignty. Without the Irish revolution of 1916-21 the emergence of what was in effect a sovereign, independent republic in everything but name as early as 1937 was inconceivable.’ Above, bomb damage in Dublin following the Easter Rising. Photograph: Topical Press Agency/Getty Images

Consideration of the form, nature and purpose most appropriate to the commemoration of 1916 should focus first and foremost on purpose. Why, in short, should we commemorate the 1916 Rising? Such a simple question may seem banal but there are two reasons why it is imperative. First, because the politically correct mania for inclusiveness seeks to diminish the unique historical significance of the Rising. Second, because of the danger that the froth and frenzy that have characterised this year’s essentially meaningless debate about the commemoration of the enactment of Home Rule in 1914 may have comparable consequences.

There is a real risk that the commemoration of the Rising will degenerate into a self-indulgent exercise in whatiffery: that the recognition of the importance of what happened in 1916 will be diluted by the unhistorical obsessions of the crystal-gazers with what might have happened if the Rising had not taken place.

The best point of departure is the indisputable historical fact that the 1916 Rising was the catalyst for a series of events that meant that the independent Irish state was born out of violence. Many of those who brought about that revolution – Patrick Pearse and Éamon de Valera are but two examples – were initially Home Rulers rather than advocates of physical force. But they despaired of constitutional nationalism when the British government yielded to the Ulster Unionists’ threat of force and failed to put in place a Home Rule parliament in Dublin before the Great War.

When that war was over, the British government offered not one but two Home Rule parliaments, one in Dublin and the other in Belfast, under the terms of the Government of Ireland Act 1920; this notwithstanding the fact that the nationalist electorate had disowned the Home Rule party and given Sinn Féin a democratic mandate in the 1918 election. Nor did British ministers have any expectation that Sinn Féin would accept such a niggardly offer. So it came as no surprise when they yet again yielded to violence in the shape of the IRA’s guerilla war and conceded the larger measure of independence embodied in the Anglo-Irish Treaty of December 1921.

This bald recital does not demand any approval, retrospective or otherwise, of the use of violence as a political instrument. But it does demand a recognition of historical reality. It also poses the fundamental question about the purpose of the commemoration of the Rising: should the blood then shed inhibit, even, perhaps, prohibit, the Irish Government from commemorating the seminal event on the path to absolute independence? Or, to put it another way, should we be ashamed of our independence because it was achieved through violence?

Reflections on the Irish State

Those addicted to the study of history as they would prefer it to have been rather than history as it is might care to ponder two other questions from that same essay. In the extremely unlikely event of “a single Irish Home Rule entity” eventually having emerged on the island of Ireland, “would it have been all that different from Northern Ireland, save for the switch between Orange and Green conservatives? Might there not have been the same stifling one-party rule, the same hopelessness with regard to social or political change, the same orientation towards London as the ultimate source of political power and the ever present source of natural subsidies?”

But, as the centenary of 1916 approaches, the most apposite aspect of FitzGerald’s reflections on Irish independence relate to sovereignty. Without the Irish revolution of 1916-21 the emergence of what was in effect a sovereign, independent republic in everything but name as early as 1937 was inconceivable. The independence then attained was affirmed by Ireland’s unwavering commitment to a policy of neutrality in the second World War and, in 1948, the Republic of Ireland Act, steered through the Dáil by a Fine Gael taoiseach, removed any remaining ambiguity among all parties about Irish sovereignty. Thereafter relations between the Irish and British governments have been conducted on the basis of absolute equality between sovereign states.

Ireland, on the other hand was so secure in its perception of its sovereignty that the proposal that Ireland should embrace the European enterprise was endorsed by an overwhelming 83 per cent of the electorate in the 1972 referendum.

His conclusion that Irish independence “was in fact secured almost at the latest date at which it could have been usefully achieved” is persuasive. Nor is it the least of the reasons why we should unashamedly commemorate the 1916 Rising as the catalyst without which the status of an independent, sovereign state could not have been so soon achieved.

Ronan Fanning is professor emeritus of modern history at University College Dublin and the author of Fatal Path: British Government and Irish Revolution 1910-1922. He is now writing a biography of Éamon de Valera