Cliff Taylor: Rail strike a taste of things to come

Finances need to be stabilised as they must be in health, education and childcare 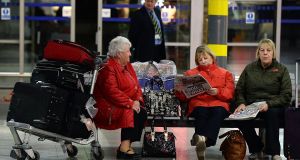 Passengers wait for a train: the lossmaking Irish Rail has an accumulated deficit of €135 million. Photograph: Cyril Byrne/The Irish Times

Day in, day out, the Government is beating the drum of economic recovery. Then, during the week Ibec said more than two out of every three firms would next year give wage increases to employees, averaging 2 per cent.

So while the Irish Rail dispute that stopped the trains this week was about complex issues of past and future productivity, the backdrop is rising expectations that the recovery is going to deliver higher pay for all – and that the money is there to do so.

There are real issues here for the Government as an employer to face – and they go well beyond the railways. Remember that not all public sector employees have accepted the Lansdowne Road agreement; the ASTI’s rejection, for example, has led it to warn of possible industrial action next year. The TUI, the Association of Garda Sergeants and Inspectors and higher public servants have also voted no. Meanwhile, there are all the employees of commercial state companies not covered by Lansdowne Road, some of which – including Irish Rail – are facing big financial challenges.

Were it a private sector company, Irish Rail wouldn’t be offering pay rises to anyone. It isn’t a private operator, of course, but its drivers – having made pay concessions last year for a two-year period– now believe they should be rewarded for moves which will increase productivity. But the trouble is that while the State’s finances are improving, Irish Rail remains deep in the red.

Irish Rail is loss-making and has an accumulated deficit standing of €135 million, according to its 2014 annual report. Like all the CIÉ companies, its accounts are supported by exchequer cash, relating to the public obligations it undertakes and its need to invest. Once the exchequer keeps putting in cash, the show can go on.

There were some signs of improvement in its finances last year as revenues rose, but more cash from the exchequer was also part of the picture. And now we are told the company’s operations are losing around €1.5 million a month.

In this context, demand for higher pay – unless linked to clear future savings – is basically a demand that the exchequer pay more. It is part of the general grab for State resources we are now seeing across the economy. This is despite the fact that we will have to borrow €4 billion next year to bridge the gap between spending and revenue.

In his 2014 statement in the company’s annual report, chief executive David Franks warned this would eventually lead to trains running more slowly and “increased challenges in maintaining safety performance”. This isn’t very comforting to passengers, particularly as underinvestment has been blamed for serious incidents in, among other countries, the UK and France.

There is a threat from the European Commission that it might require the running of the rail network to go out to tender under a new directive due to come in to force at the end of 2019. Even if the Government fights this off, it is a sign of a new environment, with support for railways governed by new state aid rules and other areas of transport – the Luas and more of the bus network – run by private sector operators.

There is another issue lurking and it is an important one, particularly as rules on state aid are tightened. There is very little business on several of the rail lines run by the company, and they are heavy lossmakers. These include lines such as Limerick to Ballybrophy, running through Nenagh, Waterford to Limerick Junction and the Ennis to Athenry line, part of the planned Western Rail Corridor now unlikely to be completed. To what extent is Irish Rail going to be obliged to run these routes in future? And is the continuation of at least some of them due more to local political pressure than to any real analysis of social and economic benefit?

Now the pressures of a recovery bring more complex problems right across the public services and State companies. And all this is against the backdrop of rising expectations that we are on the up, fuelled by a Government system heading for a general election.

The headline issue at Irish Rail is pay and conditions – and we are going to see that repeated elsewhere in the coming months. But I suspect the real crunch issue in Irish Rail is the need to stabilise its finances and generate more cash to fund investment, backed by a real strategic view of what kind of network we need.

The same applies, in different ways, to health, education and childcare – the public fuss will be about pay and conditions, but the real challenge is laying the groundwork to provide decent services to a growing population.

1 Coronavirus: No swift return to ‘normal state of affairs’, warns expert
2 Good news: Jacinda Ardern’s leadership masterclass and four other feel-good stories
3 Growing hope in Government of partial easing of restrictions after May bank holiday
4 Coronavirus: Ireland will have to ‘live alongside the virus’
5 Chief medical officer urges people not to visit hardware stores
Real news has value SUBSCRIBE