As parties get into campaign mode, expect to hear these phrases again and again 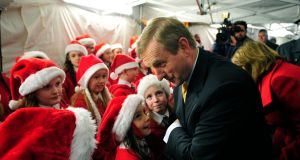 Taoiseach Enda Kenny has already started to use the phrase “long-term economic plan” in his speeches. Photograph: Aidan Crawley 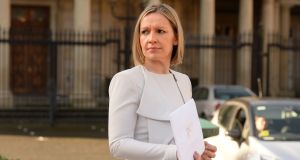 Lucinda Creighton’s Renua has “rewarding work” as part of its slogan. Like all good election slogans, arguing against it is practically impossible. Photograph: Cyril Byrne/The Irish Times

As we head into 2016, the general election is almost upon us. The parties are brushing up their programmes – and their promises. Key to the election battle on the economy will be language – phrases designed to resonate with us and win our votes. Here are nine to watch out for . . .

Taoiseach Enda Kenny has started to use “long-term economic plan” in his speeches – he did it again this week – and has said a formal document entitled Keeping the Recovery Going will be central to his party’s election programme.

Whatever Fine Gael offer by way of pre-election promises on tax cuts and spending hikes, we will be soberly assured that it is all part of “the long-term economic plan”. You will be hearing this one a lot.

2. The Nordic model: Remember this? The Coalition parties have been promising to do away with the “boom-bust” cycle and bring Ireland to the kind of steady growth seen for many years in Scandinavian economies. Ministers used the phrase a lot about a year ago when the recovery seemed slow to gain traction; the subtext was slow, steady growth was better. Predictably we have heard less of it as growth surged to 7 per cent

This phrase is clever because the Scandinavian countries are also seen to have succeeded in providing good public services in areas such as education, childcare and health.

The Nordic economies have come under pressure more recently, with Denmark and Finland suffering economically and anti-immigration parties on the rise as the old social democratic structures are questioned. Still, the Nordic model is a nice soundbite.

3. The hard-pressed “whoever”: It can be the hard-pressed homeowner or working family or taxpayer. Or their cousins in the “squeezed middle”. The point is that all parties will try to persuade big sections of voters that they feel their pain and will do something about it.

Sinn Féin will target “working families”. Fine Gael will aim more for the “hard-pressed taxpayers”. Labour talks about “standing up for families”.

The trick during an election campaign is to convince your target group they will do better with you in office and any pain involved in paying for it will fall elsewhere.

4. Making work pay/rewarding work: A key issue being heard from voters, according to a number of party sources, is that many do not feel they have the kind of standard of living that working should deliver them. As unemployment falls, this is becoming as big an issue as the number of jobs available. Higher taxes and the welfare system can, in some cases, leave limited financial incentive to work.

We are already hearing Fine Gael talk about “making work pay” and flagging plans to support the incomes of lower- paid employees. Lucinda Creighton’s Renua has “rewarding work” as part of its slogan. Like all good election slogans, arguing against it is practically impossible. It was also a key theme of the Conservative Party’s UK campaign last year.

5. Austerity: There is no getting away from this one. In overall terms, austerity is over in the sense that the era of budget cuts is behind us. But how the cuts were implemented and their legacy are all live election issues. Sinn Féin, the People Before Profit/Anti-Austerity Alliance group and other left-wing Independents will define a lot of their campaign as being “anti-austerity”. They know there remains a large group that is furious at what has happened and that, in many cases, is disillusioned with the old party system.

6. The two-tier recovery: This is another one for the anti-austerity campaigners and the Opposition. They cannot attack the Government on the existence of the recovery, but they can question who is benefiting.

One of Sinn Féin’s phrases is the need for a “fairer recovery”, and along with the anti-austerity groups, it will claim the “golden circle”of Government supporters and financiers are making hay while the recovery bypasses the masses. There will also be a debate on whether areas outside the big cities are benefiting from recovery.

7. High tax , high spend: This one is already being thrown about, most recently by Minister for Finance Michael Noonan in a dig at the direction he said Fianna Fáil would take the public finances. It appeals to voters’ desire for lower taxes and their scepticism that higher spending can lead to better services.

8. High-quality public services: This is an answer to the “high tax, high spend” charge. It says we can have good public services, but they have to be paid for. The Social Democrats use this one at the start of its policy message, and Fianna Fáil will focus on plans for improvements to health and education. There will be promises to develop “world-class” public services and, of course, to “invest for the future”.

9. Stability: In the end a lot of it will come down to this one word. The Government parties will try to persuade people that the only way to guarantee stability and continued growth is to re-elect them. The Opposition will argue, in various ways, that more of the same is not what we need, As ever, the voters will decide.