Chelsea Manning’s release is the inspiring proof: we can overcome

Chelsea has taught me that no matter how huge the obstacles to social and political change may seem, when people come together nothing is impossible

In one of his last acts as president, Barack Obama, commuted the sentence of whistleblower Chelsea Manning, formerly Bradley Manning, after she had served seven years in prison. The ex-US army private leaves prison today. 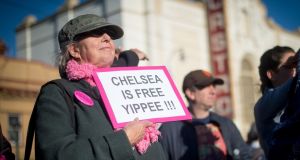 Renay Davis holds up a sign showing support for Chelsea Manning in the Castro District of San Francisco, California on May 17, 2017, during a celebration for Manning’s release. JOSH EDELSON/AFP/Getty Images

I’d be lying if I said that I always thought this day would come. Over the last few years that I’ve been one of Chelsea’s close friends and supporters, there were many times that I had lost hope. I’m ashamed to admit that during some of our phone conversations, I would feign optimism in an attempt to raise Chelsea’s spirits, while quietly despairing that she wouldn’t survive.

But Chelsea did survive . And in the process she taught me – and the world – a valuable lesson.

Tyranny thrives on our collective self-doubt. Authoritarianism is built on the contagious idea that there is nothing that we can do to challenge it. Oppression lives in our cynicism and in the times when we do nothing – out of fear that if we do something our actions will be in vain.

Even in the darkest moments – after two suicide attempts , and years of brutal incarceration in conditions that the United Nations condemned as torture – Chelsea held on to a special brand of realistic optimism that infected her supporters, and kept us fighting for her, even when it felt like the odds were insurmountable.

Chelsea is an intelligence analyst. She is well trained to look at all of the moving pieces in a situation and decide what should be done. As an activist, I’ve learned a lot from Chelsea’s brilliant strategic mind. She taught me the importance of sticking to your guns, but also setting achievable goals and keeping the path to victory in constant focus.

As battles for justice rage on year after year, advocates for social and political change run the risk of becoming addicted to losing. Our identities are so tied to being the underdogs. We’re the people who speak truth to power even when we know power isn’t listening. Working to support Chelsea helped me confront this tendency in myself. The stakes were just too high. Losing the campaign meant losing my friend.

The stakes are equally high with the causes that many of us – including Chelsea – hold dear. In the fight for the future of humanity, losing is not an option.

Chelsea is an inspiration to so many people, from libertarian tech geeks to rural transgender youth. She surrounded herself with a strong community of supporters – people who came out of the woodwork to fight for her freedom and shed light on the US government’s inhumane treatment of her. We protested outside the Pentagon, showered Chelsea with birthday cards and love letters, gathered hundreds of thousands of petition signatures, and bombarded officials with phone calls, tweets and media requests.

Fight for the Future and dozens of other groups helped ensure that the government could not erase Chelsea Manning from public view – despite the fact that she was denied most visitors, barred from speaking directly to the media and had to fight just to get a recent photo of herself released to the public. She advocated for herself too, going as far as to go on hunger strike to demand access to the medically recommended healthcare she was being denied. By fighting for herself, she has set legal and social precedents that will benefit countless others.

Since the news of Chelsea’s commutation , supporters have continued to organize to ensure that her basic needs are met as she transitions back into the free world. We launched a GoFundMe page to cover her living costs as she restarts her life, and renowned musicians such as Tom Morello, Thurston Moore, Graham Nash, Talib Kweli and Against Me! have contributed to an online benefit album that I compiled as a surprise “getting out of prison” present for Chelsea.

The last few months have been a bit surreal. but the first time that Chelsea’s release felt real to me was when I told my kid about it. We often talk about Chelsea, “Mima’s friend who is in prison for telling people about bad things the government was doing”. When I told my child that Chelsea was going to be released, a wave of joy and hope washed over me. How incredible that my little one can grow up in the world knowing the true power of organizing, and that when we come together to fight for what we believe in, nothing is impossible.

Evan Greer is a transgender activist, musician, and writer based in Boston. She’s the Campaign Director of Fight for the Future and a friend and supporter of Chelsea Manning.