Chairman of the Board – An Irishman’s Diary about Jim Walsh, the world’s longest-running chess correspondent 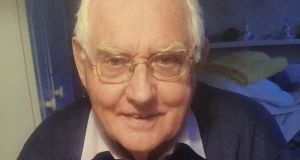 JJ Walsh: by next Thursday, he will have served 61 years and five months

Never mind the world championship, which climaxed in New York on Wednesday. The big chess story this week is nearer home – in this newspaper, to be exact, where our man JJ Walsh is on the brink of becoming the game’s longest-running columnist ever.

By next Thursday, he will have served 61 years and five months.

This equals the record of one Hermann Helms, who covered chess for the Brooklyn Daily Eagle from October 1893 until mid-March 1955. The exact date of Helms’s debut is unclear. And in any case, his reign was interrupted for a few years. But even ignoring that, and taking his overall span as the record, 61 years and six months will beat it.

This being so, the race is already over. Like all good chess players, JJ (85 next March) works many moves ahead. His latest batch of columns runs until Christmas.

The next one is already on a USB and will take us to February.

So who is JJ Walsh? Well, the first thing that needs to be said is that he’s not really JJ at all.

Friends call him “Jim”. He only became JJ when his father, also James, got annoyed about the number of chess-related letters he suddenly found himself opening in the early 1950s.

A golf enthusiast, Walsh snr was not an admirer of chess, considering it on a par with “snooker”. It was Jim’s mother who introduced their son to the game, for mainly therapeutic reasons. That’s because of the other two-letter combination that defined our correspondent’s life. He owes his chess career to TB, or more precisely a condition called “TB hip”.

It kept him home from school for three years in his early teens. Before that, he had been a promising rugby player, captaining Belvedere College under-12s. By the time he got back, it was too late to catch up in either rugby or class.

But in the interim, he had discovered chess, as a duck does water.

He would represent Ireland in three Olympiads. The highlight was Munich 1958, and a game against the mighty USSR. “They smashed us, 4-0,” but he got to play the world champion Mikhail Botvinnik, who took five hours and 38 moves to beat him.

Walsh had already become a columnist by then. His day job was in the family’s pharmacy on Dublin’s Westmoreland Street. And by a happy chance, this was next door to The Irish Times, which in 1955 had been seeking a chess writer.

Walsh fitted the part and, starting on July 7th that year, contributed a weekly column until 1972.

His page neighbours included Myles na gCopaleen, a man of many self-proclaimed talents who once described how he had beaten “Capablanca” (considered the greatest player ever) in “seven moves”.

This was unlikely. Jim played the real-life Brian O’Nolan, and remembers him as less than proficient, “unlike his brother Gearóid”.

The year 1972 was pivotal to Walsh’s career. With the Fisher-Spassky showdown in Reykjavik attracting unprecedented interest, he covered it daily for The Irish Times, and came in every night to help sub-editors lay out the moves: “To them, it could have been a knitting pattern”.

From the resultant earnings, he and his wife Maureen bought a pair of luxury curtains. “We called them the Bobby Fisher curtains,” he says. Maureen died in 2009.

He has the curtains still.

Since 1972, his column has been daily, and in the format it takes today (No 13,684), a set problem with short accompanying text.

He still “roughs” out each diagram on paper using stamps, then corrects it and now finishes it on computer.

He keeps meticulous records. All his columns are filed, with numerical and alphabetical indexes. He also owns an extensive collection of chess-related literature. Not having children, he expects his archive to go to the UK’s National Chess Library in Hastings, eventually.

He is still, however, very much in the game, and the chess correspondent’s life seems to lend itself to longevity.

His closest rival to succeed Helms, Leonard Barden, is now 87. Barden already has the world record for the longest daily column (60 years in London’s Evening Standard).

And via his weekly Guardian feature, he can also claim an unbroken run since September 1955.

But as for Helms’s record, Walsh had a two-month start. He also had relative youth on his side. “Alas,” wrote Barden in 2014, “there is a claimant with much better chances than me”.

So it has proven.

For now, anyway, it’s checkmate to our Jim.