Cars are safer, but insurance claims have doubled in past 10 years 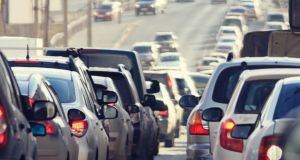 ‘For car rental providers, the past four years have seen our third-party liability costs more than treble. They are now three times higher than in France; and twice as high as in Germany, Spain and the UK.’ Photograph: Getty Images

Thousands upon thousands of overseas visitors are landing on our shores this summer, excited and eager to soak up everything Ireland has to offer. Ireland’s tourist sector is one of the success stories. Last year we welcomed more than 8.6 million visitors, a whopping 13 per cent more than the previous year. And 2016 is expected to be even more successful; a “bumper year” according to Fáilte Ireland.

The number visiting for work reasons is also growing, thanks to our reputation as a competitive, cost-effective and business-friendly environment. There are a thousand good reasons why Ireland is home to overseas companies.

Visitor-wise, everything is trending upwards and that is great news for everyone whose livelihood depends on attracting people to Ireland.

There is a speck on the horizon: the rocketing cost of motor insurance. For ordinary motorists, it is much more than a “speck”. By the end of 2016, the average motorist is likely to be paying €300 more for a comprehensive policy than two years ago.

What is causing this relentless rise? There are many factors at play, including a culture of underpricing in the insurance market. However, it is the surge in personal injury claims, with multiple claims per accident commonplace, that continues to have the biggest effect on premiums.

This brings us to the obvious paradox. The cars we drive and the roads have become safer. However, the number of personal injury claims made to InjuriesBoard.ie is rising – and the value has more than doubled in the past decade.

Have we really become such dangerous drivers?

It’s the ordinary motorist who bears the brunt and that will have a stifling effect on our personal mobility as more people decide they can simply no longer afford to drive a car.

Meanwhile, the tourist industry must deal with rising insurance costs.

Tourism has not figured much in the debate on insurance; so far it’s been a “hidden” repercussion. For car rental providers, the past four years have seen our third-party liability costs more than treble. They are now three times higher than in France; and twice as high as in Germany, Spain and the UK.

We have had to increase our liability reserve by almost 200 per cent, to the point that our liability costs are the biggest of any Enterprise operation in Europe. After people and cars, liability is now our third-biggest expense.

Rising insurance costs will also act as a potential barrier to investment and job creation. That is already happening for us.

So what to do? The Department of Finance has begun its investigation into the cost of motor insurance and a good start would be to look at ways to a. reduce the amount of money being paid out for personal injury claims, and b. stamp out the idea it’s easy to get a payout.

The department would do well to consider an EU benchmark for soft-tissue injuries. This would bring us in line with other EU countries where liability costs are lower, where the average payout is lower – and where the price of motor insurance is not rising 30 per cent each year.

There would be objections, of course. What about people who have a legitimate claim? Let’s be clear – anyone with a legitimate claim deserves an appropriate level of compensation. Do they deserve to get twice or three times what people in France and Germany get? Why are they getting that?

An EU benchmark for personal injuries would redress the balance now overwhelmingly in favour of the claimant; it would prevent fraudulent claims; and it would reduce the legal costs. At a stroke, it would bring normality back to insurance.